The most notable difference in the NL Central this year will not be the coming or going of any one player, but an entire team. While most people didn’t notice that Houston still had a team, they jumped ship to the American League West in a move that made so much sense it took years to accomplish. We do get to see how much of Cincinnati’s second half was trend and how much was mirage and hopefully what they can do with a full season of a healthy Joey Votto. Don’t count out the cagey St. Louis Cardinals or the scrappy Pittsburgh Pirates who might have something to say about the outcome of the year. You can, however, count out the Cubs. 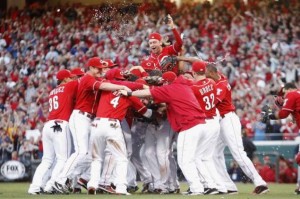 Coming off a 97 win season and only getting better it seems that this would be the Cincinnati Reds’ division to lose. They successfully lengthened their lineup this off season by picking up Shin-Soo Choo (who is absolutely tearing up the Cactus League) from the Indians. His versatility will give them a lot of different lineup combinations. Scoring runs should no longer be an issue this year for Dusty Baker’s squad, who only scored 669 last year (NL average was 683). The Reds’ pitching staff compensated for that last year by allowing the fewest runs in the NL (588), second only the Tampa Bay Rays (577). All-World 1st baseman Joey Votto looks like he is getting close to full strength after last year’s knee injury that limited him to 111 games. Aroldis Chapman will be starting the year in the rotation after saving 38 games with a 1.15 ERA. Time will tell how that move plays out, but it certainly makes one of the best pitching staffs in the game better.

This Cardinal team is just too good to count out but not good enough in my opinion to slay the giants of the National League. Losing Chris Carpenter for the year with a shoulder injury doesn’t help. They are going to be fighting for a spot in a top heavy National League playoff picture that might be an uphill battle. Fortunately for Cardinals fans, baseball games are not played on paper and they do have a group of experienced winners. Unfortunately for Cardinals fans, just having guys on your team who have won before doesn’t mean they will win again. They are pretty much going to roll the balls on out the field with the same cast of characters they had last year, minus Kyle Lohse (maybe). Pittsburgh is closing the talent gap quickly, but this is too good of a team to not be playing meaningful games in September.

The Pirates remind me of the kid who tells himself before every semester of college that this is going to be the semester that he is going to take it serious and get good grades. Three weeks into the semester things are going well and he hasn’t missed a class yet, but then the new Tiger Woods golf game comes out on PS3 and things start to unravel. This is a good team that has every intention to be great and then they sign Francisco Liriano to a multi-year deal who promptly turns around and does the most Francisco Liriano thing imaginable and breaks his arm trying to scare his kids. Bottom line is that even though Andrew McCutchen is one of the best players in the game they are still missing at least one big bat and one legit starting pitcher before they can challenge the Reds for king of the NL Central hill. They can always try playing Russell Martin at shortstop…

The Brewers lead the NL in runs (776), home runs (741) and slugging percentage (.437). Flat out, they can hit the ball. They have a very competent pitching staff that led the NL in strikeouts last year and they don’t commit a lot of errors. They were one of the more creative teams when it came to finding ways to lose games last year. I imagine that manager Ron Roenicke and Carlos Gomez have a conversation about once a week regarding what a cutoff man is and why it is important that he catches the ball. They did manage to win 83 games last year and they didn’t really move the needle one way or the other this off season. They will probably be around .500 again this year with the natural attrition due to the Reds and Pirates getting better and no longer getting to play the Astros 15 times. An interesting sub plot is that the Brew Crew’s pitching staff featuring two players from Team Mexico (Gallardo & Estrada) and one from Team Canada (Axford) who were involved in the little brew-ha-ha in the World Baseball Classic. For the Brewers sake, let’s hope nobody makes a comment about the ability of someone’s Lord to hit a curveball.

The Cubs were flat out awful last year. They didn’t really hit, they didn’t really pitch, they weren’t fantastic in the field, and they lost 101 games. I think we can give General Manger Theo Epstein the benefit of the doubt that he is turning the ship around (Carlos Zambrano isn’t on the roster anymore, so that’s a plus). They have some nice pieces in Castro and Rizzo in the middle of that order and they have added some pitching this year that will make the product on the North Side of Chicago a little more palatable. If they were a normal team, they’d still be three years out from being competitive, but with the deep pockets of the powers that be that timeline could be expedited. Epstein proved that he can build a team in Boston and there is no reason to believe that it can’t be done in Chicago. Unless you believe in curses.