While the teams in the other division in the American League have been busy making blockbuster moves this offseason, the members of the AL Central have been quietly making moves to improve their rosters. The baseball world (and Vegas) may be putting their proverbial eggs in the basket of the Angels & Blue Jays to win the pennant, the Central still has the reigning American League Champion, one of the best hitters in recent history, the best pitcher in baseball, and some of the best young talent in the game. While the Tigers may be the odds on favorite to win the division but I’m not convinced they are the best team in the division. 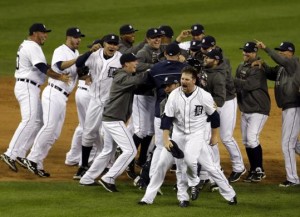 I’m not sure what it is about this White Sox team that makes me think they will walk away with the division crown. They are definitely a more athletic team than Detriot and the rotation is solid; though they are missing a #5 starter (ask the Twins, they have five or six to spare). This was a team that spent 117 days in first place last year only to fade off at the end, but I saw enough last year to make me believe that the team that started the year off hot was more trend than mirage. For them to win the division Alex Rios, Jeff Keppinger, and Paul Konerko are going to have to not only meet last year’s numbers but exceed them. I think they might just have what it takes.

Fresh off their 2nd division title in as many years and a World Series appearance, it may seem strange that I’m not picking the Tigers to win the AL Central again. I feel the shortcomings that reared their ugly head against the Giants are going hurt them again this year. Adding the ghost of Torii Hunter in right field is as much of an upgrade as adding a 37 year old outfielder can be, but defensively they still give games away. With the rotation they had last year and what they got from Miguel Cabrera, who just doesn’t stop hitting, only winning 88 games in a weak AL Central is not impressive. I am excited to see how the Tigers bring along Avisail Garcia this year as we can expect him to spell Dirks in left and Martinez as the DH. He will eventually have to face right handed pitching, but it seems like he has the tools to be a middle of the lineup guy for many years to come.

By trading for James Shields, the Royals are trying to put an end to their state of perpetual rebuilding. Fun Fact: The Royals have had 1 winning season (2003) since 1995. This team definitely has the potential to win 82+ games this year. They are a few pieces away from being a serious contender but it gives Royals fans something to be excited about for the first time since the first Clinton administration.

Cleveland brings a plucky lineup to the table that really intrigues me. The additions of Michael Bourn, Drew Stubbs, Mark Reyonlds, and Nick Swisher add pop and speed to make this a legitimate major league lineup. Sources say they get uniforms and everything this year, it’s really great. Arizona Fall League MVP Chris McGuiness has a really good chance to break camp with the big club this year to fill in the void left by the departure of Travis Hafner’s size 8.5 head. The downfall of the Indians will ultimately be their pitching staff (or lack thereof) and that keep them out of contention come September. They are trending in the right direction and are really only a year or two away from once again being a major factor in the AL Central.

After acquiring top of the rotation pitching talent this offseason, the Twins have set up their pitching staff to be competitive for a few

years to come. That said, they had to trade away two top of the lineup centerfielders in Denard Span & Ben Revere in order to land those pitchers. Twins General Manager Terry Ryan has made it clear that he is committed to solidifying a pitching staff that has been a weak link since they have moved into the “pitcher friendly” confines of Target Field. This team is going to be hamstrung by not having the table setters that Mauer, Willingham, & Co. are used to having hitting in front of them. I expect to see Morneau return to form now that he is completely healthy, but Willingham and Plouffe will regress to the mean to make it another long summer in Minnesota.