According to CBS Sports Jon Heyman, Selig confirmed it by telephone:

“You can believe it,” Selig said, pretty convincingly.  Asked whether he’s serious, he replied “I really am, I know the owners are having a tough time with it … (But) I am serious.” 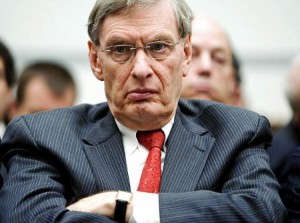 Selig has essentially been at the Major League Baseball helm since 1992, when he was named as Chairman of the Executive Committee of Owners, then in 1998 he was formally named the 9th Commissioner of Major League Baseball.  Being that was 21 and 15 years ago from those benchmark dates, it makes sense (along with his age) to move on.

He certainly had a number of positives.  According to Heyman:

The sport’s rise to become an $8-billion-plus industry (from $1.2 billion when Selig began in ’92), 21 years of labor peace (counting until through the end of the current CBA), 22 new ballparks and especially the through-the-roof franchise values are big reasons for that popularity among owners.

During Selig’s tenure, “radical” advancements like the Wild Card, three division leagues, the movement of the Milwaukee Brewers to the National League, the Houston Astros to the American League, and, of course, interleague play were introduced.  With the latest shift of the Astros, interleague play is now an everyday occurrence.  Also, the fledgling World Baseball Classic is a part Selig’s dynasty, as is the first use of instant replay (limited).

His tenure wasn’t without controversy and criticism.  The Major League Baseball All Star Game that ended in a tie in 2002, followed by the decision to give the winner of the All Star Game home field advantage in the playoffs has been met with continued criticism (note, World Series home field used to be decided by whether the year was odd or even).

He also governed during the so-called “Steroid Era”, in which traditional home run records such as Roger Maris single season record of 61 and Hank Aaron’s career record of 755 were broken with ease by players who later admitted or were found to have taken performance enhancing drugs.  Selig was criticized for ignoring for the sake of sport popularity, revenue, and fans.

There is an appreciable lack of heir apparent.  The next commissioner would need 3/4 of the votes of owners.  There is significant disagreement between franchises with high revenue and payroll (Yankees, Red Sox, Cubs) and those who minimize payroll and seem to make a profit by not winning (Astros, Pirates, Royals).  The next commissioner will have to find a way to make all parties happy, and we may end up without one for several years, or even a decade.

Selig’s final words ring true that it really is over (according to Heyman):

“I’ve done this for a long time, and I’m proud of what I’ve done,” Selig said.