The 100-year-old Boston landmark Fenway Park will play host to its first football game in over 45 years in 2015, when it hosts the Notre Dame Fighting Irish vs. the Boston College Eagles on November 21 of that year.  The game is part of Notre Dame’s “Shamrock Series” in which the team angles to play games in large, metropolitan stadiums for the national fan base as well as recruiting.  ESPN’s Matt Fortuna noted in an interview with Boston’s mayor that the city is excited for the opportunity to host the Irish:

“The City of Boston will be ready to welcome Fighting Irish and Eagles fans alike when Fenway brings this historic rivalry to one of our most beloved landmarks in 2015.  I’m looking forward to a memorable weekend that puts Boston, and all the great things our city has to offer, in the national spotlight.”

Given the smaller-than-normal field dimensions (even for baseball) of Fenway, it will be interesting to see how much room their is beyond the 120 yards of legal playing area plus benches, etc.  A Northwestern vs. Illinois game at Wrigley Field in 2010 resulted in a last minute decision to switch ends after each change of possession as to always have the offense proceed away from the brick outfield wall for player safety.  Boston College played their home games at Fenway up into the 1950’s, so it’s been done before.  And it’s not like the ballpark has had major renovations since then so there is a plan I’m sure. 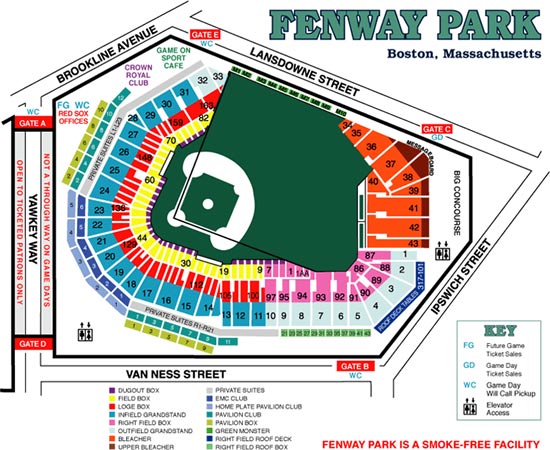 This will mean that Notre Dame will play in both Yankee Stadium and Fenway Park over the next 23 months, as they play in the New Era Pinstripe Bowl to conclude the 2013 season on December 28th against the Rutgers Scarlet Knights.