The Toronto Blue Jays Melky Cabrera, currently on a rehabilitation assignment in Florida, was accused by a waitress of being a little tight on a tip at a local Chili’s.  Cabrera played his first rehab game in Dunedin, Florida, on Friday and apparently treated his teammates to dinner after the game (unless he rang up a $70 bill himself).  Unwritten rules dictate the veterans on rehab in the minors always spread some of that major league salary love to the lower level kids trying to make ends meet.  However, the love wasn’t necessarily extended to the waitress.  According to Facebook updates and Tweets from a Melissa Dickson (@whitesoxdiaries), the near 2012 NL batting champion and 2012 MLB All-Star Game MVP was a little tight on the tip.  Courtesy of Deadspin.com: 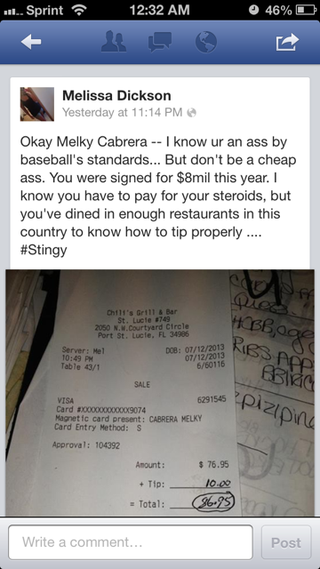 I waited on Melky Cabrera (cheapskate) & now my bf got called up & is on his way to AA w/the @mets.. It’s been an eventful baseball night!⚾

So quick math shows that Cabrera tipped about 13% on the post-sales tax amount, 14% on the pre-tax amount.

And did we mention his 2-year, $16M contract?  That comes out to about $900 per out per game he plays.  Seems like he could have chipped in another $10 for the hard-working waitress.  Although we don’t know how good the service was, maybe someone had a drink spilled in the lap or got the wrong order.  One would think that Chili’s would have accomodated these local celebs with the utmost treatment.