I hear the calls now “this is why we need instant replay” and “instant replay now”.  But what if you had instant replay and it didn’t work?  We have a case in point.  Of course, we’re talking about the apparent home run by Oakland Athletics IF Adam Rosales off of Cleveland Indians Chris Perez, which would have tied up the game with 2 outs in the 9th inning, but was ruled a double on the field.  Then upheld upon review, the only reviewable play allowed in baseball.  Judge for yourself via MLB.com (the definitive shot happens at about 2:00):

And now, according to the AP via FoxSports.com, MLB executive vice president, and baseball legend Joe Torre verified the call was “improper” but noted that an overturn is not in the purview of the commissioner’s office:

“By rule, the decision to reverse a call by use of instant replay is at the sole discretion of the crew chief,” Torre said in a statement released during Thursday’s series finale. ”In the opinion of Angel Hernandez, who was last night’s crew chief, there was not clear and convincing evidence to overturn the decision on the field. It was a judgment call, and as such, it stands as final. ‘Home and away broadcast feeds are available for all uses of instant replay, and they were available to the crew last night. Given what we saw, we recognize that an improper call was made. Perfection is an impossible standard in any endeavor, but our goal is always to get the calls right. Earlier this morning, we began the process of speaking with the crew to thoroughly review all the circumstances surrounding last night’s decision.”

The last case I heard for this was the apparent (and actual) perfect game by Armando Galarraga in which an overturn of a missed bang-bang call at first could have ended the game with the same result and a simple scoring change affecting a batting average by a point or two.  The commissioners office didn’t sniff.  And they won’t now, this one would have to be replayed from a different point. 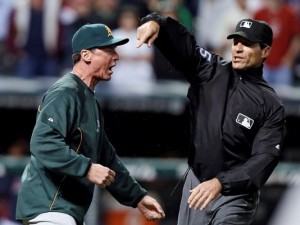 Melvin took the high road after the game:

”I don’t have much to say about it,” he said. ”I’m not going to talk to them about it. If they want talk about it’s one thing, but I’m just going to take the lineup card out.”

”I’ve heard from MLB and I’m not going to say what they said,” Melvin said before the A’s and Indians wrapped up a four-game series. ”It’s probably what the majority saw, but what they’re going to do from here I haven’t had any discussions about that.”

Umpires and all referees are human. It’s a shame that a game result was affected.  And the umpiring crew, who should be subject to performance reviews, should face strong discipline, these guys make a lot of money and performance should be expected.

Otherwise, tomorrow is another day!