This is one of the biggest offseasons the Yankees have faced half a deacde. Prior to the 2009 season, the Yankees inked AJ Burnett, Mark Teixeira, and CC Sabathia en route to winning their 27th World Series Championship. Hot Stove season can have a huge and immediate impact on the impending regular season and postseason, but this offseason is of particular interest for Yankee fans because of its long term implications. The RBTS staff put their heads together and tried to answer some of the biggest questions they are looking at this offseason. We tackle what they should do, and to a lesser extent, what we think will happen.

How far do they go to re-sign Robinson Cano?

Let’s start with the elephant in the room, Robinson Cano.

After the mistake that was the $275 million Alex Rodriguez contract, the Yankees couldn’t possibly make that same mistake again, right? Their (more reasonable) fans certainly hope not. The Yankees are currently struggling to cut payroll under the weight of Rodriguez’s massive contract. While I am not lamenting the Rodriguez contract–he led New York to a World Series–the principle of the move was silly. A contract that pays a superstar who is a shade past their peak for prior performance is foolish.

The evidence is quite clear that paying big name players until they’re 40, no matter how tempting it is when they’re still in their early 30s,  is a disastrous recipe. – Forbes

Robinson Cano turns 31 before next season, not an old fart my any measure, but also not someone at the early stages of their prime. Cano and company are now asking for a 10-year $305 million dollar contract. That’s just silly talk! Now it may be an intentional overstatement in an effort to set a favorable starting point to negotiations, but the Yankees would be foolish to go too much beyond a 6-year $150 million dollar contract. Even a seventh would take him through hsi age 38 season and be pushing the envelope. Dustin Pedroia signed a 7-year, $100 million contract. Pedroia at that rate is multiples more valuable than Cano at what he is asking.

The Yankees have already offered Cano six years and $144 million. I could imagine them increasing that amount by another $18 million, but anymore would be a major mistake. As tough as it may be to swallow, Forbes, a publication that nails it on the head more times than not, gets it right when they say:

An old school-style rebuilding job, say a three-year plan, may be needed.  No sense letting a 30-something infielder tie up major resources as his production invariably declines. That $300 million could be far better spent elsewhere.

The best case scenario for New York is the sign Cano to a hefty, but reasonable, six or at most seven year contract. The worst case scenario is giving him 10-years. Losing him would fall somewhere in between.

Will Joe Girardi be back?

At this early stage we have to assume he will be back. He is well liked by all parties to the best of our knowledge and is an extremely well-qualified candidate.

Who takes over for the greatest closer ever?

This may be the emotionally toughest question to answer, just because Mariano Rivera has been so beloved and so reliable for such an extended period of time. Nonetheless, it must be done. First, let me illustrate just how much Rivera has meant to the Yankees dynasty. The video below, courtesy MLB.com, shows Rivera exiting his final outing in Yankee Stadium.

So what do they do? David Robertson has been one of the best setup men in baseball over the past three seasons and is entering his age 29 season. When Rivera went down with a knee injury in 2012 Robertson got the first crack at closing. When he didn’t hit he ground running, Rafael Soriano got hot and held the role all season. With Soriano in Washington, Rivera retiring, and Robertson just completing a success 2013 season, David Roberston deserves the first crack. He saved a game during the Yankees trip to Houston once Rivera had essentially retired with his performance and goodbye shown in the clip above, likely sign of things to come.

Joba Chamberlain should not and likely will not return. Instead Grant Balfour, Jesse Crain, and Joaquin Benoit, all of which are free agents, should be strongly considered as additional options in a setup role and a backup plan for Robertson.

Is Brian McCann an option at catcher?

Absolutely. We expect Brian McCann to be the most notable addition to the Yankees next season and the fit couldn’t be better. The lefty power hitter is perfect for Yankee Stadium and would be a tremendous upgrade over Chris Stewart, Austin Romine, and Francisco Cervelli. Additionally, he could use the DH spot to get a spell while still keeping his bat in the lineup. This would keep him fresh while also giving Romine some time behind the plate, as he and hot prospect Gary Sanchez figure to eventually be the primary catchers a few years down the line.

Although McCann may prefer to stay in Atlanta, the Braves will have a lot less to spend. Lower taxes and a more competitive ball club (not to mention Duluth, GA is his hometown) may lead McCann to give the Braves a hometown discount. That said, the emergence of Evan Gattis in Atlanta would make it stunning if the Braves outbid the Yankees who (as explained later) have the money to spend and a hole to fill. I expect the Yankees to give him about 4-years and $60 million if not more.

What will happen to Alex Rodriguez?

While it is doubtful his contract will be magically thrown out, it is equally doubtful that Rodriguez is allowed to play in many games next season. Although Buck Showalter won’t be thrilled, that means for at least one year, that’s a lot of money off the books in New York.

What’s the plan at 3B then? What about shortstop? Can Jeter be counted upon?

Given the Yankees need to rebuild and think about 2015 and 2016 more so than 2014, I don’t see them making a huge splash at 3B, especially considering Rodriguez will be in the mix after he serves his suspension. A short term contract for a veteran like Michael Young is viable, but Brendan Ryan, Eduardo Nunez, and Derek Jeter should be able to cover 3B and SS sufficiently with Jeter getting plenty of days off and turns at DH. I expect Derek Jeter to retire after next season and hope he will get the same sort of honorable goodbye that Mariano Rivera received due in small part to announcing his retirement early.

Will they cut payroll down to $189 million?

The Yankees played this season with a $228 million payroll and given what is coming off the books, they have an opportunity to trim quite a bit off the payroll. First let’s look at who comes off the books:

I’ll save you the math. That list above sums to a whopping $111.15 million (plus AJ Burnett’s deal with the Pirates, which is being subsidized by the Yankees, expires)! What an incredible amount! I can’t think of another team that ever had so much coming off the books in one off-season. To get down to $189 million they’ll have to reduce payroll by $39 million from last year. Even if they double Cano’s salary next season (to $28 million) they’d still have about $44 million of cap space for 2014. That’s enough to retain a few of those departing contracts (Reynolds and Logan?), offer arbitration to David Robertson, sign Brian McCann, add bullpen help, and even ink a few other pieces. If Rodriguez gets suspended for the season getting under $189 shouldn’t be a problem. If not, this all goes out the window.

The Yankees have to offer Granderson a one-year contract at about $15 million to earn a compensating draft pick should he leave. I’d be stunned if Cashman decided not to make this offer. That said, they shouldn’t and likely won’t offer much more so he could be gone. With Alfonso Soriano, Ichiro Suzuki, Vernon Wells, and Brett Gardner under contract there is no need. Outfield prospects Tyler Austin, Mason Williams, and Slade Heathcott make the situation in New York look fairly promising. Soriano, Suzuki, and Wells enter the final year of their respective contracts and this is the one position where it looks like the Yankees have young replacements ready.

Of course, given his injury plagued season, it’s possible he may not see an especially attractive alternative and stay in New York on a one-year deal. 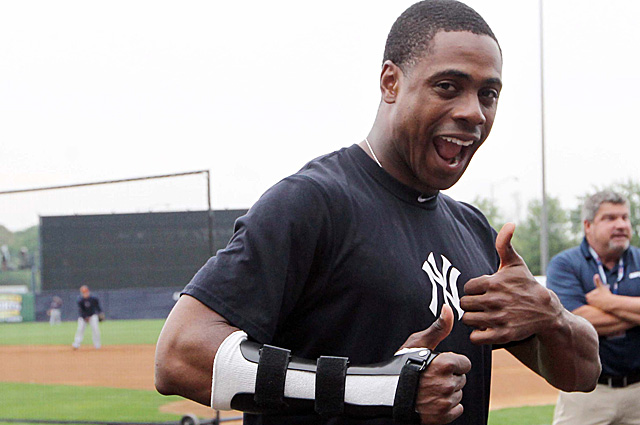 How will Cashman to fix the rotation that loses Pettitte to retirement, Sabathia from ace status and possibly Hughes and Kuroda to free agency?

He doesn’t. You simply can’t replace 3/5 of your rotation while the ace fades from his role as the rotation’s anchor. Matt Garza is a free agent, but I don’t expect New York to sign both he and Brian McCann. Ubaldo Jimenez is also a free agent, but he doesn’t seem like a safe or reliable addition. More likely the Yankees will need Sabathia to regain ace status to have a solid rotation. Nova and Vidal Nuno should be in the rotation

Kuroda will be given a qualifying offer of about one-year and $14 million, but he may just retire or finish his career in Japan. The best case scenario here would be he rejects the qualifying offer and signs elsewhere, giving the Yankees a compensating draft pick. If he chooses to retire or play in Japan, the Yankees get nothing.