Of course it’s always rainy in Seattle, and with the recent demotions of top prospects Jesus Montero and Dustin Ackley, not to mention the flop in progress that is Justin Smoak, things seem especially gloomy. Don’t fret Mariners fans help in on the way.

Shortly after being sent to Triple-A Tacoma, news broke that Dustin Ackley, the former second overall draft pick out of Chapel Hill, is working in the outfield. The change isn’t due to his own poor play at second base, but rather, the bevy of hitting prospects emerging throughout the Mariners’ farm system.

Nick Franklin, a 1st round draft choice from 2009, has taken over at second base since the Ackley demotion and is likely to hold the slot for the foreseeable future. He actually spent most of his minor league days at shortstop, but struggled with his footwork at the challenging shortstop position. Still, the Mariners are in need of help at shortstop and Franklin most certainly was not shifted to second base to accommodate their current their current starting shortstop, 31-year-old Brendan Ryan, who is hitting .210.

Seattle drafted a shortstop out of Clemson University in 2012. Brad Miller, the 2012 ACC Player of the Year who hit .402 for the Tigers, is tearing his way through the minors and seemingly has “dibs” on that coveted shortstop position when he is ready. That is why Ackley and Franklin can’t share in the middle infield.

Last season, Brad Miller was second in all of minor league baseball in hits.  While at Double-A this season, Miller led the Generals in batting (.294), hits (45), home runs (6), RBI (25), on-base percentage (.379) and total bases (72). After starring for their Double-A affiliate, the Jackson Generals (that’s Tennessee, by the way), Brad Miller was promoted to Triple-A Tacoma in late May. Since his promotion, Miller is hitting .352 with 22 RBI in 77 at bats. At just 23 years old, he is the future starting shortstop for the Seattle Mariners, and that future is fast approaching. Mariner GM, Jack Zduriencik, has already been gushing about not only his play, but his demeanor and attitude:

“Brad has been a leader both on and off the field this season,” Mariners general manager Jack Zduriencik said. “He has a knack for getting things started when they need to get started and motivating his teammates throughout the game.” (Orange and White) 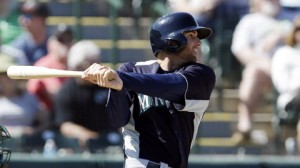 Meanwhile, the former Tar Heel and Winston-Salem native, Dustin Ackley, has been crushing the ball since taking the demotion and  making the shift to LF/CF. He is hitting .417 with a 1.110 OPS in 60 at bats in as a Tacoma “Rainer” this season. Seeing Ackley take the demotion like a man and respond the way he should (with a bat) instead of the way Ian Stewart responded to languishing in the Cubs farm system (with his twitter) is a very encouraging sign for the M’s.

@justinjabs I meant they might as
Well release since I have no shot of a call up….let me
Sign elsewhere—
BeefStew2 (@IAN_STEWART_2sc) June 11, 2013

If Nick Franklin holding down second base, Brad Miller roaring through the minors at shortstop, and Dustin Ackley re-emerging in the outfield wasn’t enough for the M’s, Mike Zunino was called up to take Jesus Montero spot, as the team’s promising catcher of the future. As a Florida Gator, he finished his junior season as the team’s “Triple Crown” winner, “leading the team in batting average (.322), RBI (67) and homers (19).” He was the 3rd overall pick in 2012, the highest ever out of UF. Furthermore, he is a better defensive catcher than Montero. He’s capable of hitting over 25 home runs with a solid batting average and good glove behind the plate.

What’s left for the M’s? Well, years of ineptitude has loaded their farm system which still has pitching to offer. Their top prospect Taijuan Walker developing into a front of the rotation starter from the right side and another big prospect out of UVA, Danny Hultzen, looking like a front of the rotation guy from the left side. Unfortunately, the team brass spend all their free agent dollars on Felix Hernandez, so it remains to be seen what type of free agents that can afford to bring in to supplement this crop of talent, but one thing is for sure, the future at Safeco isn’t as gloomy as the Seattle rain would seem to indicate.

For another post on the Brad Miller, check out my personal blog where I wrote about the Clemson Tiger who headed to Clemson, SC the same year as I.