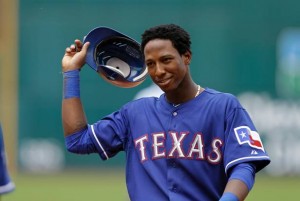 The Texas Rangers have surged to the top of the American League in 2013 as a credit to their depth.  After losing World Series contributors Josh Hamilton and Mike Napoli to free agency and Michael Young to trade, the Rangers simply added a piece here and there and promoted their talent from the minors and surged to a 28-15 record, best in the Bigs.  Their latest display of riches comes with the promotion of infielder Jurickson Profar to take the place of 3-time All Star 2B Ian Kinsler, who is sidelined with sore ribs that didn’t heal well after he tested them in the cage.

Profar just turned 20 years old in February and most scouts rank him as the top prospect in all the minors, for certain in the Rangers system.  He came up last year for a cup of coffee in September, registering two doubles and a home run among his 17 at bats, and even chimed in with a postseason hit in his only at bat (recall they were “one and done” in the Wild Card).  He will make his 2013 debut Monday against Oakland and will share time with Leury Garcia, although smart money is that the Rangers brass will use these two weeks to really see what Profar can do every day.  A natural SS, he might also get spot duty there if Andrus needs a day at DH.  The Profar/Andrus double play combination might be something to behold for the rest of the decade, since the Rangers just committed to Andrus long term.

If you get a chance to watch the Rangers play these next two weeks, watch this kid play, you won’t regret it.