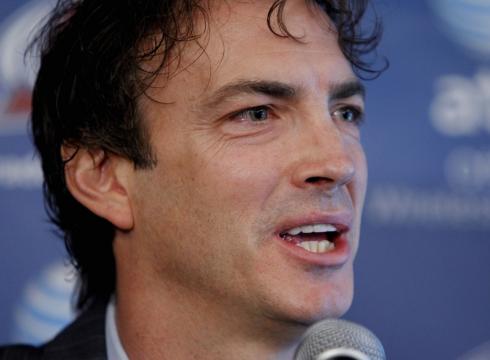 Back in April, the Colorado Avalanche won the NHL Draft Lottery, which earned them the right to draft first in the 2013 NHL Draft in on the 30th of this month. With that first pick, experts and hockey fans alike suspected that Seth Jones, the defenseman out of Portland of the Western Hockey League, would be the newest member of the Avalanche.

However, an NHL Hall of Fame member doesn’t think that’s going to be the case.

According to reports, including one from NHL.com Joe Sakic, Vice President of Hockey Operations for the Avs told the Denver Post that Colorado will not select Seth Jones, instead opting to select one of the top 3 forwards (Nathan MacKinnon, Jonathan Drouin, Alexander Barkov) provided they don’t trade down.

If “Super Joe” stays true to his word, this decision would be a total shock to not only the experts who predicted that

Jones would be the man in Denver, but to the fans of the team and sport alike.

Jones, a native of Arlington Texas, grew up an Avalanche fan and started playing hockey while the family lived in Denver, where his father Ronald “Popeye” Jones played for the Nuggets of the NBA. Popeye even asked Sakic for tips on how his son could be a better hockey player after running into him at the Pepsi Center.

The Hollywood-esque storyline plus the Av’s need for a defenseman of Jones’ caliber makes the decision to select Jones a no-brainer right?

Colorado allowed the 4th most goals in the NHL last season (152) and scored the 5th least goals in the league (114) so one can understand why Sakic and the Av’s wouldn’t select Seth Jones. But isn’t there an old saying about defense? And doesn’t that saying state that “Defense Wins Championships”? Last time I checked it does.

The Avalanche need help in that department. Greg Zanon is 33, Ryan Wilson will be coming off of a season where he spent time on IR, former #1 overall pick Erik Johnson didn’t score a goal last season and only played in 31 games, and guys like Matt Hunwick and Tyson Barrie are sold, but they don’t have the skill set that Jones has. Along with young prospects and former Saskatoon Blades Stefan Elliot and Duncan Siemens, the blue line of the Avalanche could use an upgrade.

Both MacKinnon and Drouin registered 100 point seasons with the Halifax Mooseheads of the QMJHL. Barkov, a native of  Tampere, Finland, scored 21 goals in 51 games as a 17-year-old with Tappara of the SM-Liiga, Finland’s top hockey league. All three would provide much-needed scoring for Colorado.

Let’s face it; Colorado, like Edmonton for the past three or four years, needs everything! This draft, much like the 2003 Draft, is deep. Let’s assume for a second that Colorado does trade down. Can they find another solid defender to help bolster their blue line? Sure they can! Is that kid going to be as good as Seth Jones? Probably not. Will any of those three forwards be able to make an immediate impact that this team needs? Sure why not. Will it happen? Well that’s a question that can’t be answered. The Draft, like life, is a box of chocolates; you really never know what you’re gonna get.