While the sports world is speculating about whether or not a 50-year-old Michael Jordan could compete in today’s NBA, 7-time Cy Young Award winner competed today with major leaguers [insert joke here about Astros being a AAA team] in a 20 minute session in Kissimmee, Florida as the Astros prepare for their Grapefruit League opener. 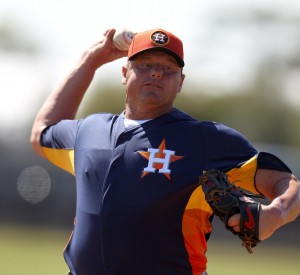 According to Brian McTaggart at MLB.com:

Clemens, wearing his familiar No. 22 in the Astros’ new color scheme, worked from both the windup and the stretch, and he even discarded the L-screen in front of the mound for his final few pitches. Carlos Pena, Rick Ankiel, Justin Maxwell, J.D. Martinez and Chris Carter were among the Astros taking their hacks against Clemens.

Clemens, 50, threw a mix of sliders and fastballs, and he called out the pitches to the hitters. He even barked a few batting tips as he was pitching.

When the inevitable questions came about a potential comeback, Clemens shot down the speculation:

“I’d rather have a glass of red wine than do that,” Clemens said as he wiped sweat from his brow. “That was fun.”

Of course, Clemens pitched for the Independent League Sugarland (TX) Skeeters last summer for 2 starts, drawing record crowds and speculation that a comeback was imminent.

Let’s not fool ourselves, Clemens would be a huge hit at the box office and quite frankly would probably settle somewhere between 3rd and 5th starter on the Astros.  It’s not going to happen, but what if it did?