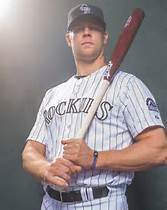 The Los Angeles Angels are currently one game above .500, and four and a half games behind the surprising Houston Astros. At the beginning of the season the Angels were expected to not only compete for a division title, but also a World Series Championship. The Angels are currently near the cellar in team batting average, the most glaring need for improvement has been the DH position. The Angels have tried numerous players in the positions including players like C.J. Cron, Matt Joyce, Kirk Nieuwenhuis, and Marc Krauss.

Currently there is a former A.L. MVP, a career .281 hitter, who can solve all of the Angels DH issues, this player is Justin Morneau of the Colorado Rockies. Morneau, who is currently on the disabled list with concussion symptoms, is expected to be activated this week. Morneau, the 2006 A.L. MVP while playing with the Twins, is in the last year of his contract and the Rockies would only want a mid-tier prospect in return, the Rockies are currently is last place in the N.L. West. If the Angels acquire Morneau he will primarily serve as a DH, but could also play first base to give Albert Pujols a day off, this will also allow Efren Navarro to be the everyday leftfielder. This may be the ideal trade where both parties benefit.