Home / Featured / Is Marshall Henderson destined for an NBA career? 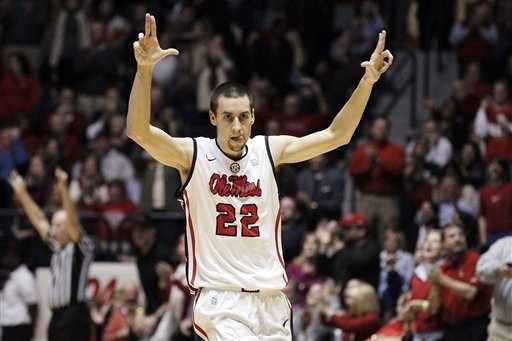 Chances are that if you happened to follow any college basketball this season, you’ve heard of University of Mississippi Junior Marshall Henderson. Most likely however, the reason that you heard about Henderson was far from positive. Whether it was the ”Gator Chomping” that victimised fans of the Florida Gators, or his now infamous, two-fingered salute directed at the crowd immediately following the Rebel’s loss to #13 seed Lasalle, the young Mr. Henderson knows that the world is talking about him. Endlessly feeding off pure hatred originating from nearly everyone who isn’t associated with Ole Miss, Henderson has become the latest edition of the sports world’s most hated athelete. Being taunted, provoked, and sworn at during nearly all his games this year, Marshall Henderson led the SEC in scoring, a rare feat for someone who exhausts this much time and energy into being an agitator. Beyond that, the kid who hails from Texas and played for his father [Willie] in high school, is exceptionally quick with the ball and plays with emotion unrivaled by his competition.

Love him or hate him, the fact remains that simply put, Henderson can play. There have been multitudes of atheletes both professional and amateur, that have done everything in their power to try and provoke an entire fanbase. In most cases however, the athelete thats doing the provoking isn’t the best player on the floor. Running through screens and confusing defences specifically designed to stop him, the often reckless guard led the Rebels to the NCAA Tournament, making no apologies along the way.The fact is that Marshall Henderson made Ole Miss better this year than they were in 2011-12 when they finished [20-14] overall, and were forced to satisfy their NCAA Tourney-hungry fanbase with a second-straight trip to the NIT. Not only did the eccentric guard lead Ole Miss to the NCAA Tournament this season, he led the Rebels to a conference tournament title, and in the process, the program beat hated rival Florida and won seven more games than they did prior to his arrival.

As a senior at Bell High School, Henderson was a standout guard who scored over 2200 points in his time there, and was ranked as the #57 shooting guard by ESPN. Turning down scholarship offers from Notre Dame, Stanford, and Bradley University, Henderson choose to attend the University of Utah. Starting 30 of Utah’s 31 games while averaging just under 12 points per game during his Freshman campaign, the Utes finished a dissapointing 14-17. Despite earning an honorable mention to the 2009-10 All Mountain West Team, Henderson was unhappy in Utah and subsequently left the following season [2010-11], to attend Texas Tech and play under legendary coach and fellow NCAA villain, Bob Knight. The transfer forced Henderson to sit out the entire 2010-11 season at Texas Tech but by the end of the academic year, Knight was fired and Marshall Henderson left Lubbock without ever playing a game as a Red Raider. Again on the move, Henderson then transfered to South Plains Junior College [Texas], and led the program to an undefeated season [36-0], a number one ranking, and a national championship on the way to being named the national junior college player of the year.

Henderson’s arrival in Oxford this season began filled with questions regarding not just his past, but also his ability to play in the SEC. Now that his past is common knowledge, and he has proven that he cannot only play at this level but even dominate at times, whats left to ask about the immature kid from Texas who launches nearly 11 three-poimt attempts per game? Of course the one thing that lingers on both the minds of the Ole Miss fanbase and their hated rivals alike, is whether or not the shoot-first guard will choose to enter this year’s NBA Draft. Love him or hate him, the potential to play at the next level definitely exists. To what extent however, is the newest topic of debate regarding Henderson. Not long after the Rebel’s upset loss at the hands of tournament darling Lasalle, CBS Sports Gregg Doyel broke the news that Henderson had in fact decided to return to Oxford for his senior year, and wouldn’t be entering this year’s NBA Draft.

What lies ahead for the ”jersey popping”, ice-cube tossing Henderson, nobody knows. At the next level however, Henderson will be limited by his size and lack of overall, raw atheletic ability. Standing at just 6’2′, and weighing only 170 pounds, the volatile shooter will be limited to the pass-first, create second, point guard spot, a position that on most nights he will be unable to defend. When NBA General Managers combine his physical limitations with his colorful past, its easy to see why teams may not want to waste the draft pick. Henderson has made it no secret that he wants to capitilise on his current status, and get paid to play basketball at the next level before that window inevitably slams shut.

So, whether you hope that Henderson falls flat on his face, or you believe that he is as great as he at times seems, Marshall Henderson isn’t done yet. Its easy to call him selfish, disrespectful and even bad for college basketball. The fact of the matter however, is that Marshall Henderson is actually good for the NCAA. Any player that can play with the passion and effort that he does, while evoking emotions of every kind from an entire fanbase, can’t be bad. Yes, Marshall Henderson is frustrating, and no, he doesn’t always make the right decision. Its not about race, personal history or even inflamatory tweets. Its about a player who for better or worse, remains true to himself. He isn’t ever going to be Aaron Craft or anything resembling a traditional, NCAA guard. He will however remain himself, and for now, thats going to have to be good enough.