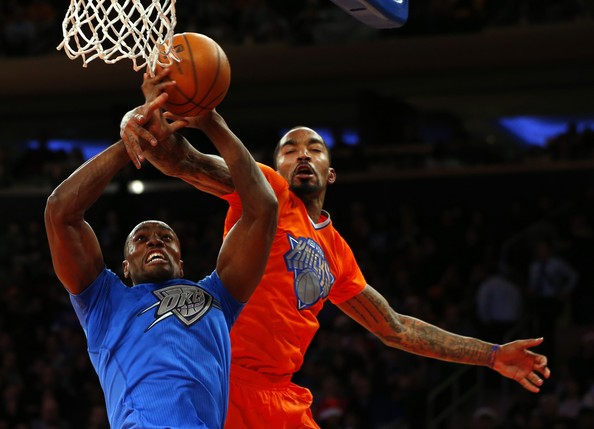 Is there still hope in the New York Knicks?
(Photo Credit: zimbio.com)

Knicks chairman James Dolan has been very vocal about his team this year and their struggles. After an embarrassing Christmas day loss to the Oklahoma City Thunder, it looks like Dolan is on damage control.

According to ESPN: At the first practice after the embarrassing loss to the Thunder, Dolan gathered his team and told them in a meeting that there are no trades or changes to the coaching staff forthcoming. Following a 9-19 start to the season, head coach Mike Woodson’s job security seemed to be slipping further and further away due to issues with the teams focus and effort along with their devastating injury bug they’ve been hit with this year.

Dolan likely held this meeting in an attempt to rally the team to work together for Mike Woodson and for the sake of the team. With essentially a third of the season gone, somehow the Knicks are NOT out of the race for the Atlantic even though they have struggled mightily. Woodson even came out and said after Thursday’s practice that he still believes the team can win the Atlantic (It surely is possible with the current leader Toronto sitting at 11-15).

“We won it last year, and I expect us to win it this year,” he said.  “The beauty about all of this that we’re going through is nobody’s running away with it in our division,” Woodson said, “and I’m pushing our team to win our division still.”

“Eventually we’ll get healthy, and we’ll see how it all plays out,” he added.

Do the Knicks have any reason to be optimistic?
Is it smart for James Dolan to tell his team that no changes are coming any time soon?