The Broncos defense has looked fairly solid this season with the additions in the secondary and a few draft picks in the front seven, but the defense could look a little better if they had linebacker DJ Williams. 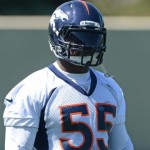 Williams was suspended prior to the start of the season for six games for submitting “non-human urine” during a random drug test from the league. He appealed and eventually lost the appeal, and has been serving his suspension throughout the firs four weeks of the year.

Now, the league has added an additional three games to that suspension for violation of the league’s substance abuse policy. He won’t be eligible to return to action until November 12th. The Broncos host division rival San Diego Chargers upon his return to game action on November 18th.

The additional suspension comes after Williams was convicted on a drunk driving charge in August, the second of such convictions since joining the team in 2004.

Don’t drink and drive kids, it’ll stop you from playing football – if you live.