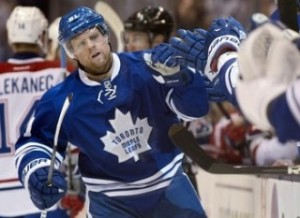 Phil Kessel is expected to sign an 8-year extension with the Leafs today. (AP)

While the finishing touches are still being worked out, all signs are pointing to Toronto winger Phil Kessel signing a new contract extension today with the Toronto Maple Leafs.

Reports from Yahoo! Sports’ Nick Cotsonika, TSN’s Bob McKenzie, and ESPN’s Pierre LeBrun all indicate that Kessel’s contract extension will be for 8 years and $64 million, giving Kessel an average annual value of $8 million. That salary would make Kessel far and away the highest paid player on Toronto’s roster, as forwards Joffrey Lupul and David Clarkson tie for second place at $5.25 million annually. Kessel is currently in the last year of a 5-year, $27 million deal he signed after being traded from Boston for two first-round picks that gave the Bruins forward Tyler Seguin and defenseman Dougie Hamilton.

Kessel has led Toronto in scoring each of the four seasons he has spent with the team, including 52 points (20+32) in a lockout-shortened 2013 season. After being acquired by Toronto as a 21-year old in 2009, this deal would make Kessel a Maple Leaf until he is nearly 35 years old.

Toronto opens their regular season on the road tonight, as the NHL season kicks off with the Maple Leafs playing the Montreal Canadiens. Presumably, Phil Kessel will be a much richer man when he hits the ice.