Most anyone who follows the National Football League enjoys playing Madden NFL, the best-selling football video game. And of course, most everyone who plays Madden, knows what happens to the player on the cover. Every year since 1999, a different player is picked for the cover of the game. And in some way, shape or form, that cover athlete gets hit by what’s known as “The Madden Curse”. The cover athlete invariably suffers a decline in production, gets hurt, or in some cases, has their career end. Is it real? Here’s a look at the top 10 players to get hit hardest by the Curse. 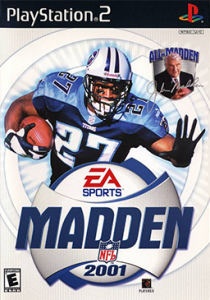 > Eddie George started his career with five consecutive 1,000 yard rushing seasons, and was rewarded by being put on the cover of Madden 2001. And after that cover appearance, George’s career took a tumble. In 2001, George scored only five touchdowns, and failed to attain 1,000 yards rushing for the first time in his career. He also had the lowest rushing average of his career that year, managing a mere 3.0 yards per carry, after never managing less than 3.7 yards per carry before the release of Madden 2001. He last only two more years with the Titans after that, finishing his career with a forgettable 2004 season in Dallas that lasted 13 games and consisted of 432 yards rushing and only four touchdowns. 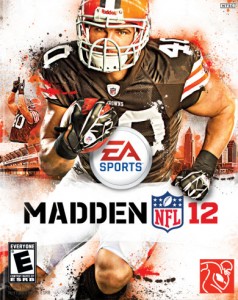 >His season’s not over yet, but Hillis is already making this list. A year after Hillis exploded onto the NFL scene with 1,654 yards from scrimmage and 13 total touchdowns, the Curse has already gotten Hillis. He’s missed three games with a hamstring injury, and has only 211 yards rushing and two touchdowns through seven games this year. But what seals his place amongst those hit hardest by the Curse, is the fact that recent reports have surfaced saying that the Browns are not going to resign Hillis after his contract expires, meaning he’ll be playing somewhere besides Cleveland in 2012. Hillis became the face of the city, a blue-collar running back for a blue-collar town that had been left without an identity after LeBron James left the Cleveland Cavaliers for the Miami Heat in free agency. The city skyline of Cleveland, the city he could soon be walking away from, is the backdrop to Hillis’ portrait on the front of Madden 12, making it all the more of a “Madden Curse” that Hillis is injured, lacking production, and will likely be leaving the city as faceless as it was after LeBron left. 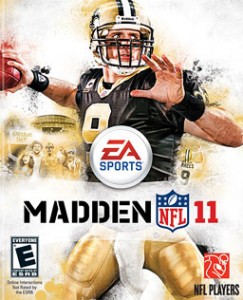 >Drew Brees led the Saints to the first Super Bowl title in franchise history in 2009, completing an astounding 70.6% of his passes for 4,388 yards and 34 touchdowns with only 11 interceptions. And, of course, he was rewarded with the Madden cover for the next installment of the video game. And, of course, the Curse got Brees. In 2010, Brees’ interception total doubled to 22, his overall quarterback rating dropped almost 20 points, and the Saints lost in the first round of the playoffs to the 7-9 Seattle Seahawks. 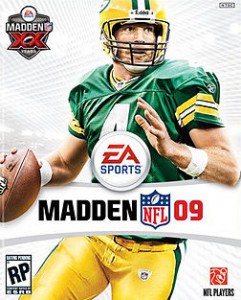 >Favre initially appeared to be safe from the Curse, as he had retired following the 2007 season. But, he came back for a season with the Jets, one that was clearly “Cursed”. A year after leading the Packers to the NFC Championship Game while enjoying one of the best years of his career in 2007 (4,155 yards passing, 28 TDs, 15 INTs), Favre was traded to the Jets. The Jets missed the playoffs while Favre threw for only 3,472 yards, and a league-leading 22 interceptions. During that same year, the Brett Favre sexting scandal also took place. 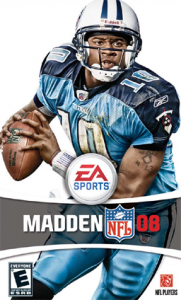 >The Curse took a little while to get Vince Young, but when it did, it got him bad. Vince Young was the NFL Offensive Rookie of the Year in 2006, and earned the cover for Madden 2008. The Curse didn’t hit Young immediately, but came back with a vengeance in 2008, when Young missed 15 games with an knee injury and also losing his starting job to Kerry Collins. Young never got back to being the player he was before the Madden cover appearance, and he is now a backup with the Philadelphia Eagles after being cut by the Titans. 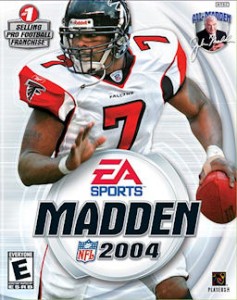 >The Michael Vick Experience took the league by storm in 2001, as this incredibly mobile quarterback beat teams with both his passing and his running. He made the Pro Bowl in 2002, and led the Falcons to the second round of the playoffs. Vick was put on the cover of Madden 2004…and broke his leg, missing 11 games in 2003. The Falcons only made the playoffs one more time with Michael Vick as their quarterback, before he was arrested on federal dogfighting charges and spent two years in jail. 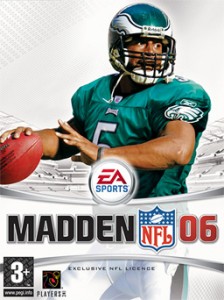 >Donovan McNabb led the Eagles to four straight NFC Championship Games…until he got Cursed. The Philadelphia Eagles made every NFC Championship Game from 2001-2004 under McNabb, but after he graced the cover of Madden 2006, the 2005 season was lost. McNabb suffered a hernia in the first game of the season. He played only nine games that year, and the Eagles finished last in their division. McNabb returned for the 2006 season, but played in only 10 games before being lost for the season again after tearing his ACL in Week 11 against the Tennessee Titans. McNabb returned in 2007, but he led the Eagles to a last-place finish in the NFC East. McNabb played only one more complete season with the Eagles before being dealt to the Redskins. 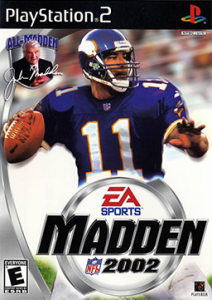 >Culpepper was a big part of the fleet of “mobile quarterbacks” that took the league by storm in the early 2000’s. There was, Michael Vick, Shaun King, Donovan McNabb, and of course, Culpepper himself. In the early going, none was better than Culpepper, who threw for 33 touchdowns while running for another 7 in his first year as the Vikings’ starter (2000), making the Pro Bowl. Culpepper was put on the cover of Madden, and the Curse consumed his once-promising career. Culpepper threw 23 interceptions while setting the league record for fumbles in 2002. In 2005, Culpepper blew out his knee and was lost for the season. He was supposed to be the franchise quarterback of the Vikings, but he spent only five and a half years as the starter in Minnesota before being dealt to the Miami Dolphins in 2006, when he again blew out his knee. He bounced around the league, starting a combined 20 games in four years for the Dolphins, Oakland Raiders and Detroit Lions. 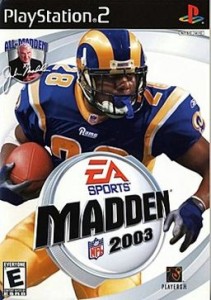 >The feature back for the “Greatest Show on Turf”, Marshall Faulk amassed over 2,000 yards from scrimmage and 21 total touchdowns while leading the Rams to a Super Bowl berth in 2001. Though the Rams lost that Super Bowl, Faulk’s incredible season got him the cover gig for Madden 2003. And of course, Faulk got Cursed. Faulk’s production slipped by over 500 yards in 2002, and his touchdown total fell from 21 to 10 in 2002. Faulk’s production again slipped in 2003, and the Rams used their first round pick in the ensuing NFL Draft to take Faulk’s replacement, Steven Jackson. Faulk spent one more year as the Rams’ starter, but then Jackson took over the starting gig for good in 2005. 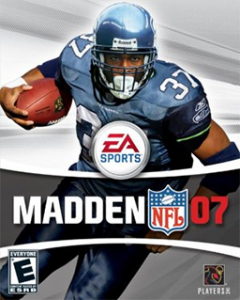 >Shaun Alexander enjoyed a season for the ages in 2005, earning NFL MVP honors while setting Seahawks records in attempts (370), rushing yards (1,880) and touchdowns (27). The latter, when Alexander set it, was an NFL record until LaDainian Tomlinson broke it a year later with 28 total touchdowns. On the back of Alexander, the Seattle Seahawks also made it to the first Super Bowl in franchise history, though they lost to the Steelers. Still, for all of his accomplishments, Alexander was rewarded by the Seahawks with a new eight-year, $62 millon contract, and EA Sports put him on the cover of Madden 2007. But in 2006, the Seahawks’ franchise player got hurt, injuring his foot and missing six games that year while rushing for 896 yards, almost 1,000 yards less than he did the previous year. Alexander got hurt again in 2007, missing another three games while running for a mere 716 yards. Sufficiently Cursed, Alexander was then cut by the Seahawks, after only two years of that eight-year mega-deal. He spent four forgettable games with the Washington Redskins in 2008, rushing for only 24 yards. He never played in the NFL after that. Three years after being the NFL MVP, the Madden Curse destroyed Alexander’s career, undoubtedly hitting him harder than anyone else on this list.