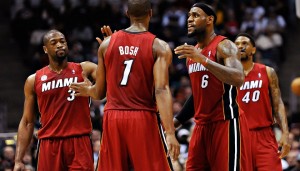 LeBron James has had some memorable quotes throughout his basketball career but this one took some reporters by surprise. He told Associated Press he didn’t think the Heat were that talented.

It is true that basketball IQ is very important, especially down the stretch with the game on the line. Most wouldn’t argue that LeBron is right when he says the team has a high basketball IQ. However, to say that they’re not talented is a far stretch. Maybe LeBron is trying to light a fire in the team, or trying to make them seem like the underdog. Either way, we’re not really buying it. The Heat is one of the most talented team in the NBA right now, and even LeBron won’t convince us otherwise.