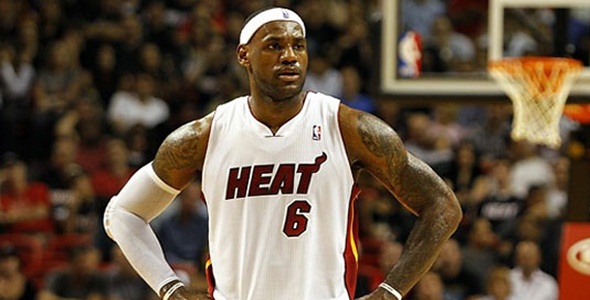 Some people will never be fully convinced of LeBron’s greatness. (AP Photo)

Anyone who has watched a basketball game over the past few years is fully aware that LeBron James is the greatest player in the world. Very few will refute this, even the LeBron haters.

This season has been particularly great for James, with his Miami Heat destroying everyone in their path. And of course, LeBron is having another freakish season, averaging 26.9 points, 8.1 rebounds, 7.3 assists, 1.7 steals, .9 blocks, all while shooting 56% from the field and 40% from three.

Clearly, LeBron James has been dominant. New Orleans Hornets coach acknowledges this, but believes that LeBron’s competition is far below the level of Michael Jordan’s. Via Hornets247:

I asked Monty whether or not LeBron dominates games the same way that Jordan does, given that he played against both, and the response was stellar– “Jordan played against men. LeBron plays against young boys. That’s the difference.”

This isn’t the first time that Monty made it known that NBA players today aren’t as manly as their predecessors.  He’s made repeated reference to the fact that kids are entering the league immature, physically and mentally unable to play at the level he expects, but this may be the first time that he’s referred to much of the NBA as “young boys”.

Two notes should be taken here. First of all, Monty Williams played against Jordan. So maybe he’s pumping his own tires here. Secondly, this comes after the Hornets were spanked by LeBron and the Heat. Does that mean that Monty’s team is just a bunch of “young boys?”

Either way, this simply seems like an old schooler who can’t fully accept LeBron’s greatness. King James could continue at this pace and win 10 rings, and there would still be people who believe he shouldn’t be in the same conversation as Jordan.