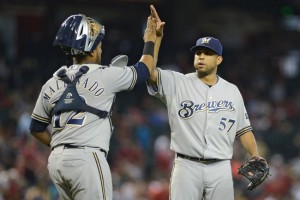 While going 0-2 in my men’s league baseball game (considered a success), news of the Baltimore Orioles acquiring RHP Francisco Rodriguez permeated through the bench. My first thought was, a relief pitcher? Then as I stood out in left field, hoping I wouldn’t have to test my depleted arm I thought, a move like this makes the most sense.

The Orioles were not going to acquire any position players, at least any high profile ones. They have a minor league system they like to cycle up and down hoping to ride a hot bat and test their players to see if they can handle major league pitching. One might think the Orioles would go after another pitcher but then again, they just acquired Scott Feldman who looks to be solidifying the middle of that rotation. It is likely that Duquette inquired about Garza, Peavy, and Norris but ended any talks when the price tag was too much. However, there is always room for improvement in the bullpen.

Headed into the All-Star break, one of the main criticisms of the Orioles’ was their starters inability to pitch deep into games. At this point, the Orioles bullpen has pitched 315 innings, 4th most in the AL. Putting too much strain and pressure on the bullpen early on in the season may yield a worn out corp at a time when the will be needed most in Septemb

er and October. No doubt adding a guy will alleviate some of that stress but how will he be used remains to be seen.

Many speculate that Francisco Rodriguez will be the new setup man for Jim Johnson, but I don’t think so. The Orioles have always used platoon approach when it comes to the 8th inning, playing match ups instead of having a full time 8th inning guy. Based on this years statistics, both Darren O’Day and Tommy Hunter are having more success against RHB than Rodriguez (.153, .125, .324, respectively). Looking at K-Rods stats from this year, he has only pitched 24.2 innings, so with more innings, I expect that Avg. to slim down towards his career mark of .192. I think Duquette saw K-Rod’s posteason ERA of 2.95 in 36.2 IP and realized he can be an asset in the postseason surrounded by an inexperienced bullpen.

Did the Orioles give up too much in acquiring the 31 yr. parting with prospect Nick Delmonico? Maybe but Delmonico was a down the road prospect that the Orioles deemed expendable. Right now, the Orioles see a window and they’re going for it.