Just when you thought that maybe Tyson Gay had worked his way back to a point to potentially challenge 2-time Gold Medalist Usain Bolt in the 100 meters this year at the World Championships in Moscow, there might have been a reason that Gay had seen a leap in time reduction.  According to Pat Graham of the Associated Press, Gay has admitted a positive test and is out for the World Championships.

Gay isn’t revealing the substance, but he says he was notified by the U.S. Anti-Doping Agency on Friday that a sample came back positive from an out-of-competition test May 16. He says he will have his “B” sample tested soon.

The 30-year-old Gay fought back sobs in a phone conversation Sunday from Amsterdam, saying: “I don’t have a sabotage story. … I basically put my trust in someone and was let down.”

Gay had run a 9.75 100m at the United States Championships earlier this year and followed it up with a 9.79 in defeating rivals Asafa Powell and Michael Rogers in a Diamond Club meet. 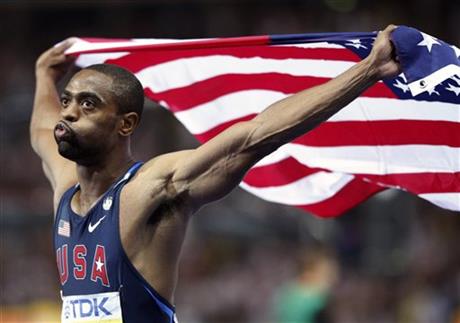