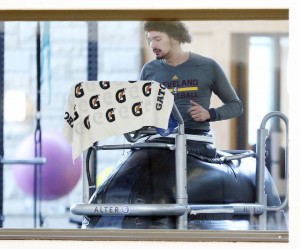 The Cleveland Cavaliers are about to embark on their first trip to the NBA Finals since being swept by the San Antonio Spurs in 2007. Other than LeBron James, Anderson Varejao is the only remaining member of that Cavaliers squad.

Varejao went down with a devastating torn achilles tendon on December 23rd of 2014, and has missed every game since. With the injury of ‘the Wild Thing’, it forced Cleveland’s hand to make personnel changes to continue their championship push.

According to Brian Windhorst of ESPN, Varejao could be at David Blatt’s disposal for the NBA Finals.

Windhorst: “I’ve been told that if anything were to go bad, Anderson Varejao could be activated.”

With the loss of Kevin Love for the remainder of the season, the Cavs seemed to be a rather thin and small squad in the frontcourt for a team that was supposed to be contending for this seasons title. Nobody seemed to pass that memo on to the Cavs and their remaining healthy players.

Tristan Thompsin has been a rock in the middle for the Cavs, while Timofey Mozgov has been the pillar in which Cleveland has based their postseason defensive prowess. Kendrick Perkins and Brendan Haywood are still on the Cavaliers roster, but will not be able to keep up with the athletic big men that the Golden State Warriors possess.

Varejao should only be used sparingly, an achilles injury is one of the most devastating injuries an athlete can suffer. He may be suited up, but a setback to an achilles on a 32 year old big man could spell the end of a career.

Varejao or not, the Cavaliers will be in Oakland for Game 1 of the NBA Finals on June 4th.