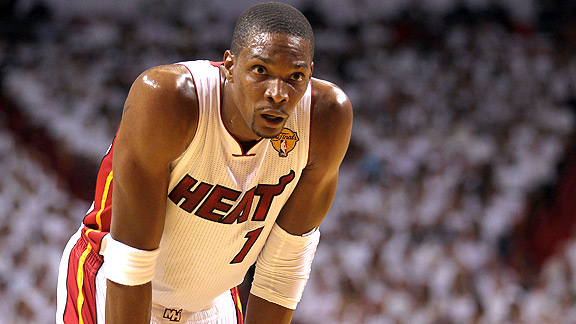 Chris Bosh to the Heat fans that left early: “Don’t come back”

Chris Bosh decided sometime around the middle of the fourth quarter that he was in an NBA Finals elimination game. Yes, it probably took the often maligned power forward of the Miami Heat that long to figure it out. Apparently a switch hit Bosh, because he became a factor down the stretch of the fourth quarter and overtime. Bosh’s key offensive rebound with less than 10 seconds left in regulation led to Ray Allen’s heroic three pointer from the corner that forced an improbable overtime.

Rewind the clock back to around 32 seconds and you could see Heat fans exiting the arena as they thought the game was over. Because anytime you have the ball down five with 30 something seconds left in an elimination game, you have no chance. So leave it to Chris Bosh, who’s been outplayed by 37 year-old Tim Duncan all series long, to send a message to the Heat “faithful” (I use that word very loosely) that thought it be a better idea to beat traffic than stay for the conclusion of the game.

Maybe the quote of the series. Maybe the season. RT @WolstatSun: “For all those guys who left, don’t come back for Game 7.” – Chris Bosh

“For all those guys who left, don’t come back for Game 7.” – Chris Bosh

I’m going to take a shot in the dark here, but I think the Heat fans probably feel the same way about Chris Bosh returning next season.