Let’s cut to the chase. Every NBA mega-star that has come along in recent memory has their own shoe. That doesn’t change the fact that when someone thinks basketball shoes, they think Jordan. His Airness was the first to garner his own personal footwear as he rose to become the greatest of all-time.

But for the 2012 Air Jordan’s, designers Tinker Hatfield and Tom Luedecke took a different approach. That approach? Getting back to the roots of the original “Jumptown” in Portland as inspiration for creating the new shoe. Today’s Jumptown is a historic district in Portland located by the Rose Garden (home of the Portland Trail Blazers) scoured with Jumpman logos and neon lights. But long ago, it was something far different. Those roots are the ones Hatfield and Luedecke are resurrecting in the creation of the Air Jordan 2012.

In the 1920’s and 1930’s Jumptown was all about hip jazz music, dance and style. That uniqueness subsequently influenced similar Black neighborhoods all over America. Neighborhoods like Jumptown came about because in those times, often times, Blacks weren’t allowed in local bars and clubs. This forced them to “do their own thing”, and when they did, jazz turned into a whole culture. It is precisely this culture that the designers are being influenced by when creating this shoe. 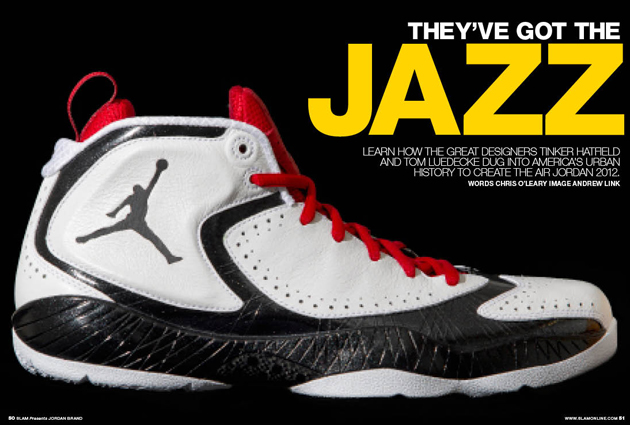 “I was sitting down and working on it, thinking about the 2012. I was looking for some inspiration,” Hatfield, an architect, city planner and the sneaker industry’s design guru begins. “I’ve been working on a project in Portland to help revitalize a part of the community referred to as Jumptown. It was really a hopping neighborhood that was the center of the black entertainment district in Portland. I was working on that project and I knew about that former district and all the famous people that were there. Louis Armstrong to Lena Horne, and Portland was one of the major stops on the West Coast.”

With Michael Jordan’s basketball career long past him, it is going to be interesting to see what other designs in the coming years will be influenced by, but I have to say this idea is excellent and original. Then again I’d expect nothing less from a long line of historic basketball shoes sporting the Jordan name.