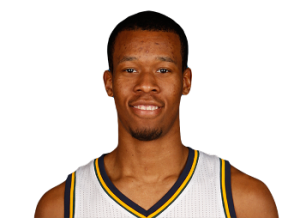 Utah Jazz rookie Rodney Hood has had a hard time staying healthy this season. Once again, Hood has gone down and will be out until after the all-star break. Via the Utah Jazz:

SALT LAKE CITY (January 20, 2015) – The following is a medical update on Utah Jazz guard Rodney Hood, who left in the fourth quarter of Sunday’s game at San Antonio with a left foot injury:

After returning to Salt Lake for further evaluation, Rodney Hood was examined by the Utah Jazz medical staff and underwent magnetic resonance imaging (MRI) testing this morning through official Jazz health care partner, University of Utah Health Care. The MRI results showed a recurrence of inflammation in Hood’s left foot. As a result, Hood’s left foot will be placed in a boot for approximately one week during which time he will continue to receive treatment. Following the removal of the boot, Hood will begin conditioning, restricted weight training and light court work. Hood will remain out through the NBA All-Star Break, at which point his status will be reevaluated.