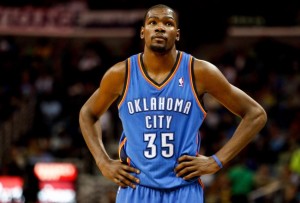 The Oklahoma City Thunder officially have no reason to believe they will win a championship this season.  Via ESPN.com:

OKLAHOMA CITY — Kevin Durant will have bone graft surgery on his ailing right foot and will miss the remainder of the season, Oklahoma City Thunder general manager Sam Presti announced Friday. Durant will have the procedure early next week and is expected to return to basketball activities in the next four to six months.

To call this a crushing blow to the Thunder is an understatement. This is more like a fatal wound that cannot be healed. As well as Russell Westbrook has been playing, there is no way the Thunder get passed the first round of the playoffs this season.

In terms of what this means for the long-term future of the franchise, it’s hard to say. The Thunder have not won a championship with Kevin Durant and Russell Westbrook as their core, and it’s unclear if they ever will. The Thunder will have to seriously consider the possibility of moving Durant before next season’s trade deadline in hopes of getting something good in return for him.

It’s not that I think the Durant/Westbrook combo can’t produce a title, it’s just that I don’t see a good enough reason to believe that it will. There’s a huge difference between something being possible and probable. Right now, it’s only a possibility that the Thunder win a championship with Kevin Durant and Russell Westbrook, whereas a couple of seasons ago, it looked probable. It will certainly be interesting to see what direction the Thunder go in wake of Durant’s latest setback.