With the 2013 baseball season less than two weeks away, Reading Between The Seams continues listing the top 10 players in Major League Baseball, position-by-position. In this article we discuss the top 10 starting pitchers. Our list has been debated by members of our staff in hopes to provide detailed information for your fantasy baseball drafts. Take a look, and tell us how you what you think of our top 10 Starting Pitchers list. Who did we snub? Leave your thoughts in the comment section below.

Zack Grienke, was originally at #8, between teammates Cole Hamels and Cliff Lee. The issue arose when he was recently shut down with elbow inflammation and although he seems to be fine, there’s just no sense in taking a risk. There is so little deviation among pitchers in the 8-13 range. If you’re taking a pitcher in this area, you just need a reliable ace, so Grienke drops out of the top 10 to 13th-ish.

10. CC Sabathia, SP, New York Yankees
Sabathia is as steady as they come. He’s come back strong this Spring after an offseason elbow scope and although the Yankee offense won’t be as potent this year, he’ll still earn his share of wins. He consistently posts 200 strikeouts, a low ERA, a solid WHIP, and 200 innings. His injury doesn’t seem to be a concern and he’ll again lead a veteran Yankee rotation. He’s now at the tail-end of his prime, but we can still expect very strong numbers. Going in the 5th round of 12-team leagues, he’s a fair value too.

9. Jered Weaver, SP, Los Angeles Angels
Jered Weaver is already 30 years old. That seemed to come so quickly… maybe I’m getting old. He’s no longer just Jeff Weaver’s younger brother, he is a legit ace. In his favor this year is Josh Hamilton’s arrival. The Angels are one of the most hyped teams in baseball after Josh Hamilton’s offseason arrival. Chasing wins is a tricky business, but Jered Weaver has a better chance to win 20 games than any other pitcher in the AL. The only downside is the dip in velocity and strikeout rate over the past three seasons. Despite tallying just 142 Ks in 2012, he allowed a minuscule 2.81 ERA. I’d expect both numbers to increase slightly and another very good season from the Angels’ ace.

8. Cliff Lee, SP, Philadelphia Phillies
Cliff Lee only won six games in 2012 and plays this season at age 34/35, so how can I put him in the top 10? The low win total was flukey, not due to poor pitching. He had 21 quality starts, the 12th most in baseball, and deserved to win many more games. The Phillies don’t have a particularly bad offense and if healthy could provide plenty of run support this season. He has adjusted to life in the National League beautifully after spending most of his career with Cleveland, Seattle, and Texas (save a short stint with Philadelphia before joining them for a second go-round) and can be counted on to post a low ERA and WHIP in the 3.00 1.10 area along with 200 Ks.

7. Cole Hamels, SP, Philadelphia Phillies
If Hamels is worth $144 million to the Phillies, he is worth a top 36 pick to me. He is right in his prime at age 29, he strikes out 200 (214 last season) a year. He’ll play in the National League and do it with a quality offense. He has overcome the health issues that were troublesome early in his career and has become a reliable, dominant workhorse. He provide essentially the same numbers as the very top pitchers at a more reasonable cost. I love Cole Hamels this season.

6. Matt Cain, SP, San Francisco Giants
I’m not quite sure how two-time World Series Champion, Matt Cain, has become underrated, but he usually isn’t spoken of in the same breath as the pitchers I have ranked ahead of him. Cain, 28-years-old, doesn’t post quite the strikeout totals of those being drafted ahead of him (193 last year, but expect around 175), but it every bit as dominant. He has posted three straight seasons with a WHIP under 1.10 and at his age, in AT&T Park, with a very good team around him, he a safe bet to have a big season.

5. David Price, SP, Tampa Bay Rays
One could make a fair argument that David Price is the best pitcher in baseball. He won the AL Cy Young last season, besting Justin Verlander. The Vanderbilt product won 20 games in 2012 and 19 in 2010. 2011 was a bit of down year though, as he posted a 3.49 ERA with only 12 wins. That may be depressing his draft stock which can play to your favor. I’d be happy to take David Price in the third round instead of any other pitcher in the first or even the second round! He plays in a severe pitchers park, but will face some of the best lineups in baseball in the rough and tumble AL East. He’s talented enough to shut them down. David Price is 27-years-old and is one of baseball’s emerging superstars. Expect a sub-three ERA, 200 Ks, and a solid win total. 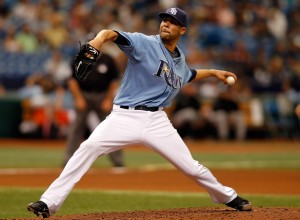 You won’t see me  draft anybody beyond this point for my fantasy team. Getting these top four pitchers is just too costly, and in a standard 5 x 5 it just doesn’t make sense to pay the price they demand. While they are superstars in the same respect as Albert Pujols and Matt Kemp, quality pitching can be easily found in the 5-10 rounds with guys like Darvish, Sabathia, and Latos.

Seattle added a lot of offense (Morales, Morse, Bay), so the biggest knock on drafting King Felix, a lack of run support and “thusly” wins, goes out the window. Although there was some injury talk when he was signing his extension, the Mariners pledged $175 million dollars so I feel fairly confident that he is not a serious injury risk. If there is such a thing as a 220 strikeout lock, Felix is it. There’s a case to be made for putting King Felix in the top three, but the tough lineups in the AL West put the kibosh on that.

3. Stephen Strasburg, SP, Washington Nationals
No more babying. It is time to see one of the best pitching prospects in ages let loose. He led all qualifying starting pitchers with 11.13 K/9. He could deliver a Verlander-MVP type of season, he just doesn’t have a long track record which makes drafting him where he is being taken a bit foolish. This guy is certainly one that I look forward to watching this season.

2. Justin Verlander, SP, Detroit Tigers
Some might argue that he is the best pitcher in baseball, but entering his age 30 season with over 700 innings pitched over his past three seasons I’m no longer crowning him the top starter in baseball and wouldn’t consider burning a first round draft pick on him (which is what it’ll take). Nonetheless, Verlander is one of the few modern day pitchers to win the MVP and dominates the American league like no other. He may be the most talented pitcher in baseball and still has a few more years left of his prime.

1. Clayton Kershaw, SP, Los Angeles Dodgers
While many are ranking Justin Verlander as their top starting pitcher (and he is phenomenal), Clayton Kershaw gets the nod for me. Both play in pitchers’ parks, but a deciding factor is that Kershaw pitches in the National League, while Verlander has the more challenging task of facing the DH. Clayton Kershaw has posted four consecutive sub-three ERA seasons (back-to-back ERA leader).

I believe we’ll look back and be amazed at just how great a pitcher we had. I hope to watch him pitch a bit more this season (tough on the opposite coast), as he is an extremely special talent. Oh, and Kershaw is 24, yes only 24-years-old. The best is yet to come. 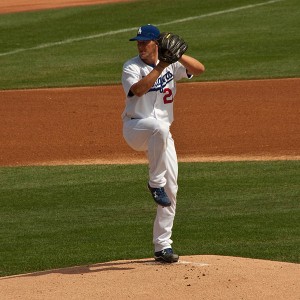