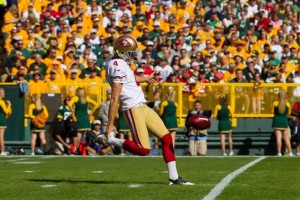 Kickers and punters don’t get much love or credit in the NFL.  San Francisco has a punter in Andy Lee that could change all of that.

In his free time, which I assume is near infinite, Lee has been working on a trick kick that he hopes to have down PAT called a ‘knuckle punt‘.  Go ahead and take that in for a moment….So it’s a punt that if it lives up to its name should wobble and dart without rotating.  Could we possibly see this live this Thursday in the 49ers preseason finale against the Chargers?

“It’s definitely something I want to do in a game to see how it actually happens in a live situation,” Lee said.  “In practice, you can do things and you can mimic as much as you can, but you never really know how a new thing you’re going to do is going to react in a game situation.  So I’d love to hopefully be able to pull it out and try it and see if it’s something I can work in my regular routine.”

Keenan Allen, Chargers rookie punt returner, has already muffed a punt against the Bears.  If Lee can get a handle on this new kick, Allen is in some trouble.  He might luck out though, as Lee hasn’t mastered the ways of the knuckle ball quite yet.

“I still haven’t gotten to a point where I’ve really solidified it,” Lee said.  “I can do it kind of on the side (in practice), and then when I get with the team it gets a little shaky.  So I’m trying to really figure out how to get it done.”

Lee just signed a six-year extension with the 49ers, so perhaps he’s feeling secure enough to give it a shot.  If you ask 49ers punt returner Kyle Williams about the knuckle punt, he’ll tell you how difficult it is to field that kick.  He’s already fallen victim to it in practice.  If Lee can translate his practice success with the kick in a game, we’ll all have to wait until an actual commercial before leaving the room for refreshments.