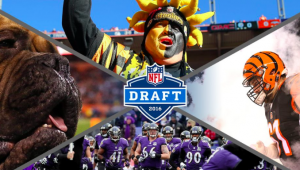 The once defensive-minded Pittsburgh Steelers have done a 180 in regards to their football philosophy. That’s right, the PITTSBURGH STEELERS are arguably the best offensive team in the NFL. And this really isn’t a surprise for anyone who’s been paying attention to Steeler Nation over the past few years.

Quarterback Ben Roethlisberger has played in a run dominated offensive for the majority of his career, but still managed to put up very respectable statistics during this time period. But then as the defensive side of the ball started experiencing a decline, Big Ben and the offense picked up the slack.

And now they’re being recognized by Matthew Berry — one of the most respected Fantasy Football analysts in the industry, as a team filled with stat stuffing players at the skilled positions.

As for the quarterback position, Berry has quarterback Ben Roethlisberger at the seventh spot. I have a feeling that spot might not also be in the top five by time next season is done.