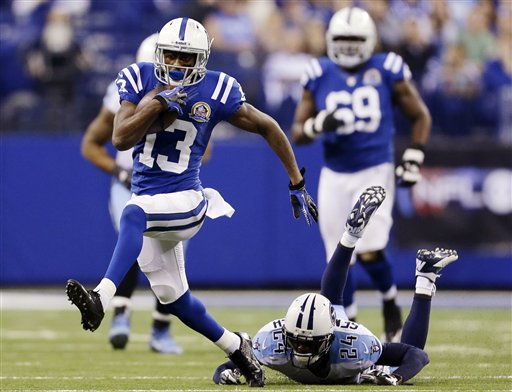 You wouldn’t like T.Y. Hilton when he is angry (Credit: AP Photo)

Despite being 43 pounds lighter than Browner, Hilton went on to torch the Seahawks for 140 yards and 2 touchdowns.

The Colts receiver added that the Seahawks should blame Browner for setting off a switch in Hilton that no one has seen in the past.

“He made me hit the light switch that nobody’s seen,” Hilton said. “He made that decision. So they should blame him.”

“He pushed the button,” Hilton said. “So he deserved it.”

Hilton’s biggest play came during the first quarter when he hauled in a 73-yard touchdown to bring the Colts within 5 points of the Seahawks.

Hilton was also asked whether or not he heard anything from Pro Bowl corner back Richard Sherman.

“Richard Sherman? He wouldn’t even look me in the eye,” Hilton said. “Not at all. The whole time.”

Colts fans will have to hope an opposing player insults Hilton before every game.