Shortly after Brad Miller’s promotion to Triple-A Tacoma, I wrote an article beaming about the Mariner’s farm system and future. Brad Miller is a major part of that. After just 26 games at the triple-A level, where he hit a cool, .356, the former Clemson shortstop and 2011 ACC Player of the Year has been promoted to the Seattle Mariners. He will take over for Brendan Ryan–who is hitting just .196–as the starting shortstop.

Brad Miller has drawn 35 walks in just 68 minor league games (combined across double-A and triple-A). As a junior at Clemson University he drew 40 walks and with an OBP near .500. If I had to give a player comparison it would be Michael Young, one of my favorite All-American ball players. Both make great contact and collect tons of hits, though Miller may have a more patient, Bobby Abreu-esque approach. Neither is a dominant power hitter or base stealer (24 home runs and 13 stolen bases are career highs for Michael Young), but both are (or were) well-rounded enough to earn very respectable totals in the categories. 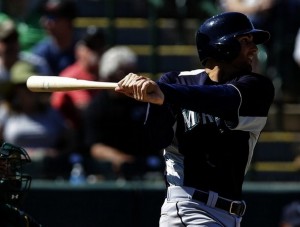 For the savvy fantasy baseball manager, he’s worth a serious look in AL-only or keeper style leagues.