Each Tuesday, I’ll put together the top most witty tweets (in no particular order) I’ve seen over the weekend about the NFL & associated topics. My tweets are pulled from my timeline and @NFLRT. Encourage you to follow @NFLRT for retweets from NFL fans like you! If you don’t see yours, don’t give up…just keep tweeting!

Hashtags get more people reading your tweets by the way; hashtag the team you are tweeting about!

In general, I’ll use fan tweets, unless some athlete/coach/media person gets really creative. Words in parentheses are mine added to clarify the context or person the tweet is about.

“#2012taughtme that Legalizing Marijuana will do wonders for your offense. Seahawks and Broncos tearing it up since election day.” – @CJRuckus

“DeMarco Murray showing so much crack today Michael Irvin wants to snort him.” – @DextersLibrary (after Murray’s pants were pulled down, completely exposing his butt)

“Ever since that Play 60 kid threatened Cam Newton for his job he’s played great. No QB controversy in Carolina anymore” – @GoogleMe_MILLS

“Sources: Adrian Peterson Ran out of the Stadium in St.Louis and is already back in Minnesota #MVAP” – @RobLoweSports

“Chuck Norris gets permission from Adrian Peterson before he goes to the bathroom.” – @The_Street_FA

“Kirk Cousins will start for the Redskins on Sunday because RG3 will be busy taking lessons from Rob Parker on how to be more black.” – @RealSkipBayliss (parody account)

A Meme from yours truly celebrating kicker Mason Crosby’s woes:

I’ll end each Top NFL Tweets of the Week with an NFL Meme, courtesy of @TheRealNFLMemes (Facebook: NFL Memes): 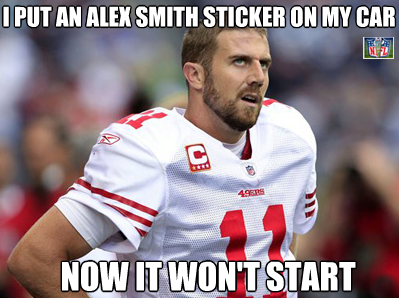