Home / NFL / Joe Flacco: I’m going to get a lot of money and we’re going to win a lot 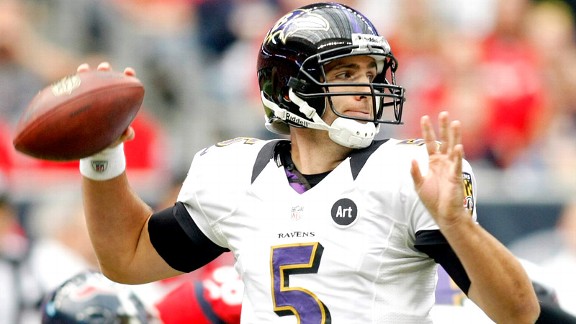 Joe Flacco believes the Ravens have a lot more wins and he has a lot more money in the future (Credit: AP Photo)

Last season, after ending the regular season at 10-6 and capturing the AFC North crown, the Baltimore Ravens beat out the San Francisco 49ers to win Super Bowl XLVII. During the 2012 post-season, it was Flacco who emerged as the star of the Ravens. Over the team’s four playoff games, Flacco threw for 1,140 yards, 11 touchdowns and 0 interceptions. Throughout the playoffs, Flacco showed the poise and leadership of an elite quarterback.

As the off-season began, the Ravens lost line backer Ray Lewis to retirement, Ed Reed left for Houston and Paul Kruger signed with the Browns.

Despite the departure of three big time defensive players, Joe Flacco’s off-season was a success as he signed a six-year, $120 million contract.

With only forty-four days until the start of the NFL Season, 2013 season previews are beginning to come out and analysts are doubting that the Ravens can repeat as Super Bowl champs.

Despite the analysts doubt, Flacco believes the Ravens have a lot more wins in their future and that he has a lot more money in his future as well.

The Ravens play in a tough division and an even tougher conference. Not only will the Ravens have to beat out the Steelers, Bengals and Browns to win the AFC North but then they would have to get past the Patriots, Texans, Colts and Broncos to win the conference.

Still, this is the type of talk you would have to expect from the Super Bowl Champs and a man who just signed a $120 million contract.