In case you hadn’t heard, the latest NFL rule proposal is causing quite a stir around league circles. The proposal calls for Running Backs to keep their heads up when running outside of the tackle box. 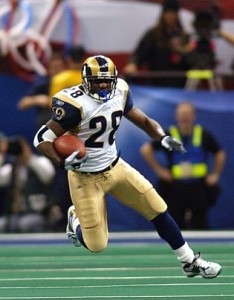 What does this mean exactly? It means that it would be illegal for a back to lower his helmet and use leverage with his shoulders as backs have been doing since the game has existed. Not only is it a safety measure players take so they don’t get their noggins rocked, it’s a strategical ploy to pick up a few extra yards by “trucking”. A move that some of the best backs in the game utilize well.

Many players have voiced their concerns over it, saying that the league is out of their minds if they think that they’re going to allow themselves to get hit with their heads straight up in all the action, and the latest guy to speak out about it is Hall of Fame running back Marshall Faulk, who was one of the best to do it.

“I understand they want safety and I’m all for safety within the game,” Faulk said Monday on the NFL Network via NFL.com. “But it can’t just be some old guys in the room who carry a football making rules that’s really going to affect how the game is being played.”

Giving another suggestion, Faulk put it out there that if the league is going to keep tweaking the game they might as well do away with the helmets altogether.

“Take the helmets off. Let’s be honest, if you think the helmet is a weapon, take it off,” Faulk said “Because I know that helmet on my head is not being use to head-butt anyone, it’s being used to protect myself.”

He’s exactly right. This rule change is ridiculous, and the old guys that come up with these things should probably stop suggesting these things.