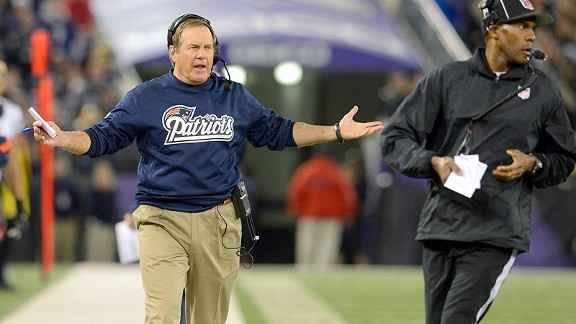 NFL to flag and fine coaches for leaving the sidelines (Photo ESPN.com)

Add another ridiculous rule to the NFL.

Coaches will be flagged and fined moving forward for, get this, leaving the sidelines. Yes, you read that correctly.

I personally don’t think that a coach leaving the sidelines is a big deal, but apparently the league does, and will start enforcing a new rule for the coaches actions on the sidelines – or rather off them – according to Clark Judge of CBS.

“We need to be much more disciplined about where our coaches go in terms of the box,” said Ray Anderson, the league’s director of football operations, “and venturing out on the field beyond traditional markers is something that is just not appropriate. It can interfere and it can be viewed as intimidating, and we really are going to rein that in.”

Some may argue that a coach leaving the field to scream at a referee should be frowned upon, but let’s be real – a coach can scream just as loud at a ref on the sideline as he can “outside of the box”.

What about a coach leaving the sideline to talk to their quarterback that just called a timeout? We’ve seen that time and time again. Will that be illegal? They say that they’ll be strict on enforcing it, but how strict?

“There are borders,” said Anderson, “but, very frankly, they’re loosely enforced. But they will be more aggressively enforced going forward because we need to rein it in.”

“Coaches can be flagged,” he said. “It’s about enforcement and point of emphasis. So coaches who, after appropriate warning, continue to venture out will pay the price with a penalty that potentially could hurt heir team.”

And if they’re repeat offenders?

“They can be fined,” said Anderson. “No question.”

What do you think of this? Is it something silly, or is this a real issue that the league should be concerned about?

If this has anything to do with the officials pulling for nicer coaches, or at least boundaries, they should all learn from this guy!

Who am I kidding, this is straight from the league. You know, the ones that fined 49ers RB Frank Gore $10,500 for wearing his socks too low – but failed to fine (or eject) Ravens CB Cary Williams for shoving an official. At least they’re consistent, right?