HORNELL, NY – Clothing brand Pant Saggin Dezign (PSD) recently signed a three year deal with Buffalo Bills star receiver Stevie Johnson to endorse their unique style of apparel, and they wasted no time getting Johnson acclimated to their hometown of Hornell, a small hamlet in Western New York a few hours from Buffalo. 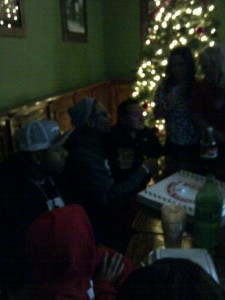 Johnson and Ya Boy at RBI, Hornell.

Being a lifelong friend of Pant Saggin founders Ryan and Curt Flaitz, it was a great experience to see Stevie and his cousin ,hip-hop artist Ya Boy (who is currently signed to Akon’s Konvict Music Label) show love to their fans. Hundreds of people lined up around the block from the Pant Saggin store in downtown Hornell to meet and greet the receiver, who showed nothing but love for those who turned out. After the signing, Ya Boy performed at RBI Sports Bar, also in downtown Hornell.

Ya Boy and I, PSD autograph session.

I was  front and center for the festivities, and was able to hang out with and have a few words with Johnson and YB. It was incredible to see guys that seem larger than life in their celebrity status be personable with everyday people and fans. YB brought the house down with his performances of his current hit single “Lock Down” (feat. Akon) and “Stevie Johnson”; his tribute to his cousin who made it to the NFL the hard way and finally hit the top. Johnson also performed along with his cousin, as the hundreds in attendance thunderously chanted “Stevie Stevie!” and “YB! YB!”

Stevie Johnson signing on with PSD is a testament in itself, as he forewent several other offers from larger companies because PSD has a “family feel” to it and fits Johnson’s outrageous style perfectly. PSD is rarity in today’s flooded clothing line market, and their success is no surprise because their brand and clothing is as unique as it gets. Johnson even had the PSD logo shaved into his haircut for the autograph signing and performance.

The evening really opened my eyes to the pedestals athletes and musicians are put on, but at the end of the day they are still everyday people. I look for bigger things to come from the PSD and Stevie Johnson connection, and feel very privileged to have been able to be a part of this event.