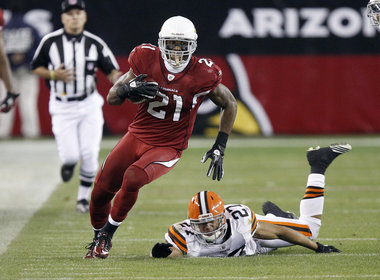 When the Arizona Cardinals selected LSU cornerback Patrick Peterson fifth overall in the 2011 draft, they knew they were getting an elite athlete with excellent cover skills in a 6-foot-1, 215-pound frame. As it turns out, Peterson can do a heck of a lot more than play cornerback and punt returner.

According to the Arizona Cardinals blog, head coach Bruce Arians has put together a “pretty big package” of offensive plays for Peterson in the Cardinals’ playbook. Today’s practice saw Peterson moving all over the offense, but he lined up mostly as a receiver. Still, the variety of skills Peterson showed off today amazed quarterback Carson Palmer, who marveled at the cornerback’s versatility.

“If he wasn’t playing corner he’d probably be just as good of a receiver, H-back or Percy Harvin-type player,” Palmer said.

As you can see in this video from the Cardinals’ blog, Peterson showed off his athleticism in a number of different ways. In three separate plays, Peterson beat cornerback and former LSU teammate Tyrann Mathieu on a deep pass from Palmer, ran a double reverse with wide receiver Larry Fitzgerald, and also took a quick handoff and threw a bullet over 20 yards to Fitzgerald.

In his rookie year, Peterson tied the NFL record for punt returns in a season with four. Peterson followed that up with a sophomore year that saw a great increase in his coverage skills, as he recorded seven interceptions and 17 pass deflections. Now, Peterson’s third season could see him contributing in all three phases of the game.

This is far from the first time we’ve seen athletic players defy positional definitions to make impacts all over the field. Devin Hester was drafted as a cornerback, but shifted to wide receiver to allow the Bears to use his speed on offense. Although his role has been diminished recently, the Jacksonville Jaguars have listed Denard Robinson as an “offensive weapon” on their depth chart. At this rate, the Cardinals may have to create a new position for Peterson if he ends up making plays regularly on offense, defense, and special teams.