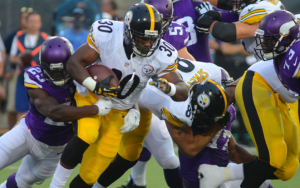 If the Pittsburgh Steelers and the NFL — notably commissioner Roger Goodell, were in-laws sitting together at the Thanksgiving dinner table, you could safely assume both parties wouldn’t get through much turkey — let alone the Thanksgiving pre-dinner prayer.

Yeah, awkward to say the least.

This time, the Steelers aren’t complaining about a hit or a fine, but rather the surface of the playing field they had to play on last year during the NFL’s annual preseason Hall of Fame Game. During that game, Pittsburgh suffered two key injuries in Shaun Suisham and Cameron Stingily. As Steelers fans will tell ya, the Suisham injury ended up costing them a game or two because replacement kicker Josh Scobee forgot what a field goal kicker does.

Then comes the hypothetical claim that this loss affected more than just a kicker and a third string running back. This is because that third string running back would have been carrying the rock in the divisonal round playoff loss against the Denver Broncos instead of Fitzgerald Toussaint. In addition, the Steelers lost a few games early in the season that could be contributed to missed field goals, so the playoff seedings could have been different as well. But nevertheless, steelers.com writer Bob Labriola implies that this played a role in Pittsburgh’s playoff loss to Denver.

Nine months ago, the Steelers weren’t shy about their frustration after playing on what they called a substandard playing surface during the Hall of Fame Game. On Friday, the Steelers reiterated how bad the field was that night, blaming the playing surface for the injuries of two of their players.

“But alas, [Stingily’s] quest ended after 11 carries for 18 yards in the Hall of Fame Game because the NFL couldn’t be bothered to stage this extra preseason game on a field with a playing surface suitable for professional athletes,” Labriola wrote. “Stingily and Shaun Suisham were the victims of knee injuries that night, and if not for that it’s possible it could have been Stingily instead of Fitzgerald Toussaint lining up behind Ben Roethlisberger in that AFC Divisional Round Game in Denver against the Broncos.”

And the Steelers players seem to agree.

“I hated that turf,” safety Robert Golden told reporters after the game. “It was old, chewed up, very hard. I’m just happy most of our guys got off healthy. Now they’re redoing it? I don’t agree with that, that’s bad, putting us at risk like that on that turf.”

“I had a couple of plays there, especially in the middle of the field, where I was sliding,” fullback Will Johnson said. “I saw a lot of guys losing their footing.”

“It kind of just boggles my mind if they knew it was so bad that they were going to tear it up they wouldn’t have replaced it before we played on it,” tight end Matt Spaethsaid. “It’s been a long time since I’ve seen something that bad … I wasn’t happy about it, that’s for sure.”

Good news Steelers Nation: You won’t be watching your team play there this year because the Indianapolis Colts and Green Bay Packers hold that honor this year.

To recap this though, injuries are part of the game. Just in recent times has NFL teams smarten up about the field conditions. Remember, for years teams played on terrible Astroturf.

In addition, it’s silly to suggest Stingily would have made a difference aganist the Steelers — as Toussaint had 118 total yards the week before to help the Steelers move past the Bengals. However, everyone will only remember the costly fumble with 10 minutes left, which helped the Broncos eventually beat Pittsburgh to move on to the AFC Championship game.

This offseason has been a lot of drama with blaming Vontaze Burfict, and now the NFL. Come on, Pittsburgh, you’re better than that.