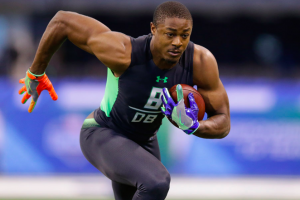 Pittsburgh Steelers first-round draft choice, Artie Burns, is extremely fast. So fast, in fact, that the dude “could’ve gone anywhere in the country for track,” according to University of Miami director of track and field, Amy Deem.

And while Burns has said that he’s fully concentrated on just football, his grandfather has stated otherwise.

Burns says his focus is only on football now. His grandfather says Burns is still an Olympic hopeful.

While we should take Burns word that he’s focused on becoming a great cornerback for the Steelers, you have to wonder if what his grandfather said might be true considering he has always ran track and is a former three-time state champion — among many other accolades.

“He could do both,” John Cason (grandfather) said. “The sky is the limit.”

Maybe it’s not simply family pride speaking. Were Burns devoted full-time to track, Deem said, the conversation about him in 2016 might be about something other than the NFL draft.

“He definitely has the athletic talent to be an elite-level hurdler,” Deem said. “He has the mindset. Some guys just do track to get faster for football, but Artie truly has a passion for both.”

Burns’ speed is a welcome addition to the Steelers secondary which struggled last season. There is high expectations for Pittsburgh this season and they need to find a starting corner opposite of William Gay.

For the sake of Steeler Nation, lets’ hope Burns mindset is on improving the weak link of the Steelers defense so that the team can make a deep run in 2016-17.