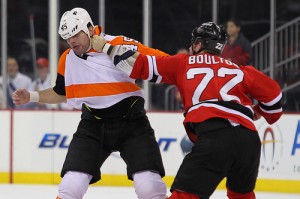 Familiar foes meet once again. These teams are bitter rivals, separating themselves by only a 100 mile stretch of highway along route 95 that runs down the heart of the Garden State. The Flyers rule south Jersey, while the Devils run the North, and no one wants to give any ground. The Flyers are a well-rested team after coming off a circus of a series with the Pittsburgh Penguins, in which they disposed of them in 6 games. The Devils, on the other hand, took their series with the Florida Panthers to game 7, where it took the heroics of Calder-Trophy finalist Adam Henrique to win the game for the Devils in double overtime. This should be an exciting series for two fan bases that absolutely hate each other.

2011-2012 Head-to-Head Matchup: The two teams split the six-game season series. The Flyers won the first game against the Devils, while the Devils won the next three. The Flyers then took the last two meetings between the two clubs.
Advantage: Even

Offense: The Devils and Flyers have weapons, there is no doubt, and the Flyers’ weapons put on a show in the first round against the Penguins. Flyers forward Claude Giroux had a breakout series, scoring 6 goals and 8 assists to lead the team. Forwards Danny Briere, Jaromir Jagr, and Scott Hartnell all added significant points, allowing the Flyers to become the first team in the East to advance to the second round. The Devils offense, however, struggled against a quick, pesky Florida defense. Travis Zajac and Ilya Kovalchuk led the team with 3 goals each, and Zach Parise added 2 goals and 2 assists to help the team advance. Calder Trophy candidate Adam Henrique also added two goals in game 7 to finish off the Panthers in double overtime. The Devils also have depth, as their fourth line of Ryan Carter, Stephen Gionta, and Steve Bernier scored 5 goals and 4 assists in the series. However, the high powered Flyers offense came to play in the first round, and they are firing on all cylinders as they enter the second round of the playoffs.
Advantage: Philadelphia

Defense: Both teams have veteran leadership at the blueline. The Devils boast names like Anton Volchenkov, Marek Zidlicky and Bryce Salvador as their leaders on defense, while Andy Greene, Mark Fayne, and AHL call-up Peter Harrold took up extremely valuable minutes against the top lines of Florida in the first round. Philadelphia, on the other hand, had a rough series on defense, although their offensive power carried them past the high scoring Penguins team. Defenseman Andreas Lilja was a -3 in the series, while veterans Kimmo Timonen and Matt Carle provided stellar defensive coverage in the first round. Although the return of Nicklas Grossman will definitely benefit the Flyers, the Devils have their own veteran corps which is more than capable of giving the Devils the edge against the high-scoring Flyers squad.
Advantage: Even

Goaltending: Both goalies got the job done in the first round, but it wasn’t pretty. This especially goes for Flyers goalie Ilya Bryzgalov, who has sometimes looked lost this season and the first round was no exception. The Penguins gave Bryzgalov a 3.98 GAA in the series, and at its peak scored 10 goals in one game, which Bryzgalov was eventually pulled. The Devils Martin Brodeur, however, had a better series although he is beginning to show his age. Brodeur looked incredible in Game 7, and gave the Devils the opportunity to win the game while keeping relatively empty. Brodeur is turning 40 next Sunday, but he still has the edge against the shaky Bryzgalov.
Advantage: New Jersey

Special Teams: The Flyers powerplay against the Devils penalty kill will be the matchup this round. The Flyers scored playoff high 12 goals on the powerplay in the first round, with a powerplay percentage of 53.3. The Devils however, who had the best penalty kill in the league entering the playoffs, struggled against the lightning quick passes of the Florida powerplay, and nearly lost the series for that reason alone. If the Devils can bring the penalty kill back to what it was at the end of the season, this should make for one interesting matchup. Until then, the Flyers have the edge.
Advantage: Philadelphia

Prediction: This should be an extremely violent series, perhaps not as violent as Pittsburgh but probably close to it. These teams hate each other, no question, and the matchups are relatively even around the board. If the Devils can recapture their game, and Brodeur can rekindle some of the old magic, the Devils will have a chance to win. However, with the Flyers offense firing on all cylinders, and with the Devils having struggled against a Florida team that many thought they would beat handily, Philadelphia’s rolling while the Devils are definitely fighting an uphill battle.
Forecast: Philadelphia in 7