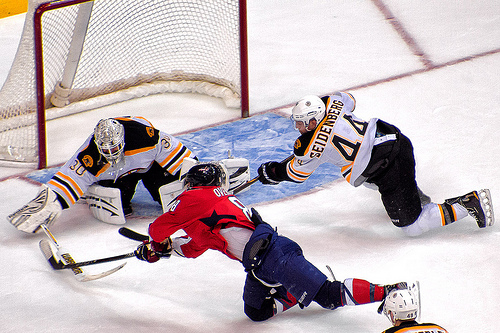 Two teams that took very different paths to the postseason now face each other in the first round of the NHL Playoffs. The Boston Bruins, who coasted into the playoffs after locking up the Northeastern Division in March, look to defend their Stanley Cup title against the ever enigmatic Washington Capitals, who almost didn’t make the playoff several after firing their coach and lack of production from their top sniper, Alexander Ovechkin.

2011-2012 Head-to-Head Matchup: The season series goes to the Washington Capitals, who defeated the Bruins three out of four times during the course of the year, most recently on March 29th, which ended in a shootout.
Advantage: Washington

Offense:  The Capitals have the firepower, with names like Alex Ovechkin, Nicklas Backstrom, Mike Knuble, and Jason Chimera that stick out at you when reading the pregame lineup. However, none of the players listed above have had incredible seasons, and the team has struggled as a result. Backstrom was out of the lineup for an extended period of time with an injury, and that hurt the team’s offensive production. The Bruins, however, have had a steady year on offense, led by their young gun Tyler Seguin who scored 29 goals this season. However, the B’s are without sniper Nathan Horton, who will miss the entire 2012 postseason due to concussion symptoms. Still, the Bruins’ balanced attack was good enough to rank second in the league with 269 goals scored, far better than Washington’s 15th ranked total of 222.
Advantage: Boston

Defense: Both in terms of personnel and execution, Boston holds the upperhand on defense when compared to the Washington Capitals. The Bruins have behemoth defender Zdeno Chara leading a unit that was 13th in shots allowed (2441) and fifth in goals allowed (202). Washington’s got some good puck-movers along their blueline (Dennis Wideman, Mike Green, John Carlson) and some young up-and-comers (Karl Alzner, Dmitri Orlov), but were 16th in shots allowed (2475) and 18th in goals allowed (230).
Advantage: Boston

Goaltending: Again, this isn’t even close. Washington has a nice stable of goaltenders (Tomas Vokoun, Michael Neuvirth and Braden Holtby) who play well in spurts, but the Bruins have All-Star and record-setting goalie Tim Thomas between the pipes.
Advantage: Boston

Special Teams: Boston had the 11th best penalty kill in the NHL with an 83.5% kill rate. Washington, meanwhile, came in ten spots below at 21 with an 81.6% kill rate. Neither team was all that effective with the man advantage; the Bruins had the 15th best powerplay unit in the league, Washington had the 18th best. Special teams is not either teams’ specialty, but the Bruins edge in penalty killing gives them the overall edge in the category.
Advantage: Boston

Prediction: Washington is not a team known for its playoff success, in lieu of its typically impressive regular seasons. And likely, that trend will hold true, especially against a team as strong as the second-seeded Boston Bruins. Boston knows how to win in the postseason; after all, they were Stanley Cup champions last year. More than likely, they’ll advance past the first round to continue their pursuit of defending that title.
Forecast: Boston in 6

By Josh Weinreb and Arun Morace