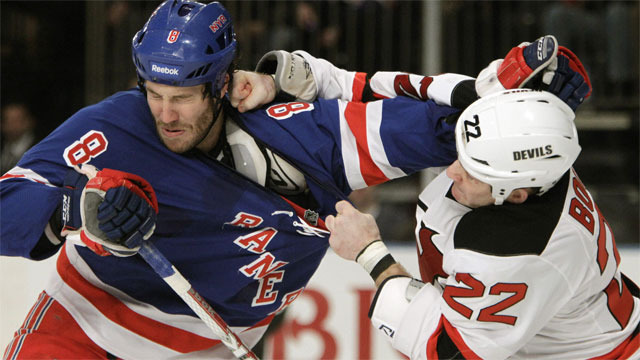 Atlantic Division rivals meet in the Eastern Conference Finals in what is a rematch of their classic 1994 Conference Final series (a series the Rangers went on to win in seven games on the road to winning the Stanley Cup). A matchup of two of the best goaltenders from the last decade, the Devils’ Martin Brodeur and the Rangers’ Henrik Lundqvist is the highlight of this series. Also of note- both teams feature at least one high-priced free agent forward. New Jersey has 102 million-dollar man Ilya Kovalchuk, while the Rangers have filled out their top line with Marian Gaborik and Brad Richards, who have a combined worth of $98.5M. If this series is half as good as its ’94 counterpart (of which Brodeur was part of), fans are in for a treat.

Offense: This is decidedly a strong point for the Devils. They’ve averaged three goals per game during the playoffs, whereas the Rangers average nearly a full goal less (2.07/game).  Scoring depth hasn’t been a problem for New Jersey either- 15 of their skaters have tallied at least one goal this postseason, compared to only 11 for New York (New Jersey actually has as many players with multiple goals as the Rangers do players with at least one).
Advantage: New Jersey

Defense: Certainly strong area for both teams. They allow around the same amount of shots (Devils- 27.8/game, Rangers-28.4/game); New Jersey kept the Flyers to only 11 goals in five games in the semifinals after Philadelphia scored 30 in the opening round against Pittsburgh, while New York has pulled off a feat no other team has done through the first 14 games of the playoffs: they’ve yet to allow more than three goals in a single game. That, combined with the Rangers’ shot-blocking prowess gives them an edge here.
Advantage: New York

Goaltending: Martin Brodeur has been quite good, phenomenal even if one considers that he’s 40 years old. A 2.05 GAA in the postseason is nothing to scoff at. However, his Rangers’ counterpart, Henrik Lundqvist, has been otherworldly so for in the playoffs. Lundqvist has yet to allow more than three goals in a single game, and has a 1.68 GAA.
Advantage: New York

Special Teams: Both teams have nine power-play goals through two rounds of the playoffs, but the Devils have done that in two fewer games and on 14 fewer extra-man chances. However, New York has been much stronger on the penalty kill than New Jersey has been. The Rangers have allowed only eight power-play goals on 46 chances (82.6% kill rate), while the Devils have surrendered 12 goals on the same number of chances (73.9% kill rate). The Rangers can likely nullify the Devils’ superior power-play, the Devils probably won’t have much difficulty killing off a weak Rangers power-play; this is a dead heat.
Advantage: Even

Prediction: These are both solid, solid teams who both deserve to be in the Conference Finals. One thing that could potentially hurt the Rangers is fatigue- they’re coming off two straight seven-game series and have to play Game 1 of the Conference Finals on only a day’s rest, while the Devils are fresh after defeating the Flyers in only five games and are coming off six days of rest. Still, while that may cost them a game or two early, this is a well-balanced New York team that is fueled by one of the best goaltenders in the game. The Devils have a lot of offensive firepower, but it may not be enough to overcome how good the Rangers are defensively.
Forecast: Rangers in seven