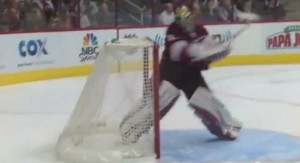 It hasn’t been the best start to the 2013 NHL season for Phoenix Coyotes goaltender Mike Smith. He let up four goals during Phoenix’s 4-3 loss to the Dallas Stars on Saturday, and then got shelled for six yesterday as the Coyotes fell to the Chicago Blackhawks by a score of 6-4. Smith finally took his frustrations out after allowing that sixth goal, and the victim was his poor, defenseless (and given the 10 goals Smith has allowed), seemingly useless goaltender’s stick. Watch the video (the carnage appears in slow-motion glory at about the one minute mark):

Shout out to Puck Daddy for the video.