We’re back baby! But before we go any further, note that this is a ‘bold predictions’, not just predictions.

After months of contract negotiations, hiring and firing of coaches, front office personnel moves and sadly the passing of Flip Saunders, NBA basketball returns tonight. The season tips off with three games, the predicted top two teams in the East; Cleveland at Chicago, Detroit make the trip out to Atlanta while the Golden State Warriors will receive their championship rings before they take on the New Orleans Pelicans.

The 82 game journey begins tonight, for many its a fresh start in a fresh new uniform, but a new season also spells redemption for some. We have ten bold predictions coming your way for the upcoming NBA season.

The Denver Nuggets are in a tough spot. In a deep and frightening Western Conference, the Nuggets have no shot at making this seasons playoffs but still find themselves paying guys loads of money. It’s time for this team to start fresh and build through the draft.

Denver find themselves dead last in Vegas odds to win the Western Conference at 200/1, but will pay the trio of Danillo Gallinari, Kenneth Faried and Wilson Chandler a combined $33.3M this season. For a team that’s bound to struggle in every aspect, that’s insane.

The Nuggets have a couple of exciting prospects in Emmanuel Mudiay and Gary Harris, but that isn’t enough to keep their fans interested. The teams GM, Tim Connelly must be active in trying to clear aging guys plugging up the cap in exchange for draft picks to give the Denver faithful something to look forward to. 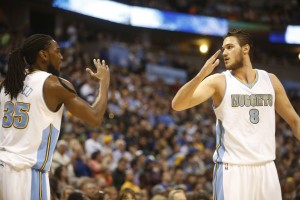 #9 – Dallas will finish amongst the leagues worst

DeAndre Jordan really baited Mavs fans into believing their team would rise again to one of the league’s elite. April Fools! The Clippers broke every unwritten rule there is, and convinced DJ to remain in LA with his Clipper buddies. In those moments, the Dallas Mavericks went from a title hope, to a lottery team.

Dirk Nowitzki is an old man, Chandler Parsons truly struggles outside of the Houston run-and-gun offense and Deron Williams just struggles. In a panic move after seeing Jordan sign and then not officially sign, they gave Wes Matthews, a 30 year old guy coming off major torn achilles tendon surgery, a max contract. That was a bonehead move on all parts from Dallas.

This ageing team is a little depressing, seven of their guys are going into 10+ years of NBA playing experience. That would be fine if there was a blend of old and new, but sadly that is not the case. Dallas may have found a late first round gem in the former Virginia star, Justin Anderson, but that is the only up-and-coming player for Mavs fans to be excited about.

Sadly, a bad season should spell the end of the fantastic career of Dirk Nowitzki. 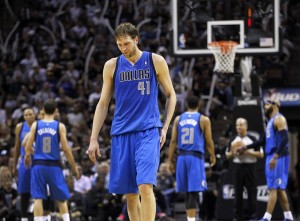 Perhaps the biggest off-season signing in the NBA, big things are expected in San Antonio from LaMarcus Aldridge. By big things, people aren’t just expecting a solid season and early playoff exit that was regarded a success in Portland. Oh no, people are expecting at least a trip to the Western Conference Finals for Aldridge and these San Antonio Spurs.

Aldridge should find himself in the starting front-court that will include himself, Tim Duncan and Kawhi Leonard. That should be a scary front-court for teams to face night in and night out, placing a lot of pressure on the 30-year-old Texas native.

For Aldridge it will all come down to consistency. The Spurs have become one of the most consistent teams in sports, going through deep playoff runs for what seems like the last twenty years. Aldridge has averaged 19 & 8 to this point in his nine year career and will be expected to post at least those numbers and inject a little ‘youth’ into this ancient Spurs outfit. 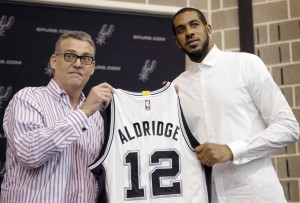 Ok, so maybe the least “bold” prediction on the list, but still makes for an interesting season. Boston have probably been the most active team in overturning players in the last couple of seasons, and should continue that trend.

Ainge made two of the most under-rated acquisitions of the offseason in bringing in Amir Johnson and David Lee. Although they were both great signings, the Celtics already kind of had a logjam on the low post, and now they find themselves with less minutes to distribute. The depth chart is stacked with the likes of Tyler Zeller, Kelly Olynyk, Johnson, Lee, Jonas Jerebko, Jared Sullinger and Jordan Mickey.

You can be certain that one or two of these guys will be moved to improve their less stacked backcourt. 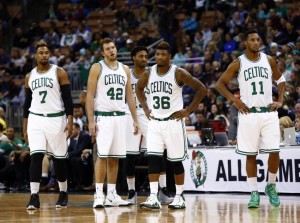 While everyone seems to be taking either Towns, Okafor or Mudiay for ROTY honors this season, Stanley Johnson should be mentioned more in this category.

Johnson wanted to play for one team, and one team only, flunking purposely on teams pre-draft interviews. Johnson was determined to play in the Motor City (as to why, that’s a mystery), and got his wish. He’s excited to rep the jersey and perform on the court and is likely to get plenty of minutes early on, progressing to starting role as the season rolls on.

Stanley Johnson has the talent and grit to become a household name in the near future, and it all starts with being named the Rookie of the Year. 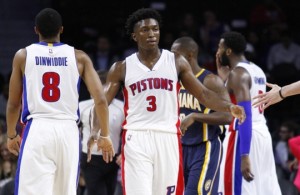 For the Cleveland Cavaliers expectations could not be higher, it’s simply championship or bust for this team. For this team to achieve that goal they must stay healthy and avoid the injury tragedies that occurred last season.

LeBron James isn’t at 100% recovering from his back injury, Kevin Love is working his way back from his shoulder being ripped out of its socket and Kyrie Irving is still in full recovery mode from his horrible knee injury. The Cavs must be patient with their ‘Big Three’ and let them recover, give them more time than they need, because lets face it, the East sucks and the Cavaliers are guaranteed to make the playoffs even with their bench.

HC David Blatt will be smart and take all the necessary precautions to make sure his superstars come back 100% healthy. The Bulls, Hawks and Pacers should all be around the top end of the East, and it wouldnt be too surprising for one of those teams to finish the season perched on top of the Eastern Conference standings.

Patience and health must be the Cavaliers top priorities this season. 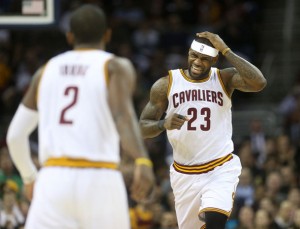 After deceiving the Mavericks and stealing DeAndre Jordan, the Clippers are under pressure to perform.

Any misfit player that was struggling to find a home managed to land in LA to play under Doc Rivers. Lance Stephenson and Josh Smith headline that category, while the Clips also managed to sign an abundance of guys that will benefit them in multiple ways. Pablo Prigioni, Wesley Johnson and most importantly Paul Pierce should elevate this team to the next level.

Year after year of early round exits from the playoffs, with Blake Griffin and DeAndre Jordan in their prime the Clippers will finally make their way to the WCF. How fun would a Warriors vs Clippers Conference Final be? 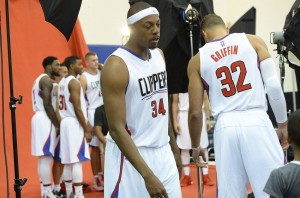 #3 – Carmelo Anthony will lead the Knicks to the playoffs

While everyone laughed at the Knicks efforts to land the big name free agents this summer, the Knicks quietly went and had themselves a pretty solid offseason. While their attempts at Aldridge and Monroe went horribly wrong, they still managed to fill some holes and not give away too much money.

Aaron Afflalo, Robin Lopez, Derrick Williams and Kevin Seraphin may not be superstars, but they fill a need that the Knicks were desperate for. With those guys and the slow progression of Kristaps Porzingis the Knicks could be fun to watch. I mean, anything is an upgrade from last season.

With ‘Melo returning to the fold, he’s fully healthy and ready to prove the NBA world wrong after pretty much giving up on him and his New York teammates. This is a season of justification and redemption for the eight time All-Star. Carmelo Anthony will return with a bang. 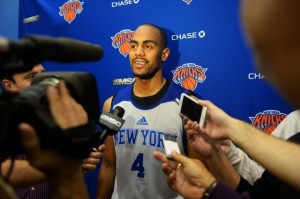 #2 – Bulls struggle, Hoiberg finds himself the scapegoat and fired

With the Bulls still relying on Derrick ‘Glass Man’ Rose, things are bound to fail. He has about as much chance of getting through the NBA season unscathed as Kanye West has a shot of becoming the President of the USA. The Bulls go into the season with an already banged up Rose, a brand new untried Head Coach and a new starting five that includes Nikola Mirotic. I’m already scratching my head.

After the Cleveland Cavaliers beat the Bulls on their home floor in 6 games in last seasons playoffs, the Bulls did nothing to improve their team. The team aged a year and no injection of new life, a very bold and soon to be realized, very stupid tactic. The Bulls are bound to struggle and just like every situation the coaching staff will be held accountable.

Now, Hoiberg will probably last longer than Mike Brown did in his last tenure with the Lakers, but his firing truly wouldn’t surprise me. Enjoy Bulls fans. 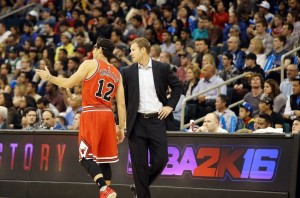 Russell Westbrook is a man possessed. Every time he attacks the rim, he does so as if the rim had attacked his own mother. After a disappointing 2014/15 campaign for his Oklahoma City Thunder, Westbrook will be looking to take things into his own hands.

The Thunder also have a healthy Kevin Durant returning to their lineup this season, but that won’t curb any of Westbrook’s intentions. He will quickly become the Thunder’s go-to guy and emerge as their #1 option. This may also pave the way for a Durant exit, leaving this team well and truly in Westbrook’s control. 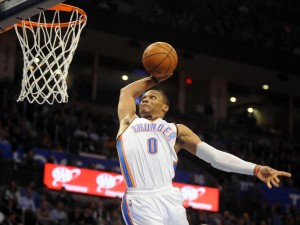