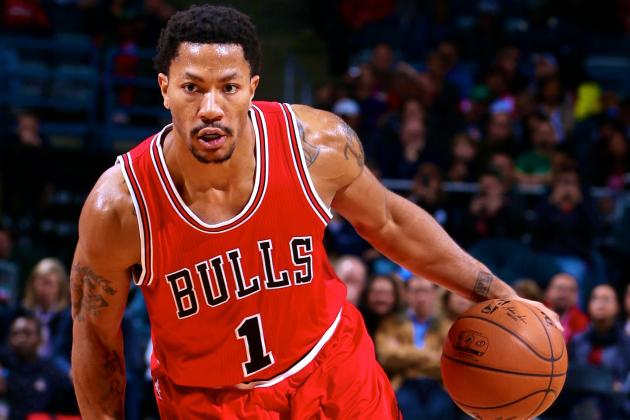 Usually when these types of rumors start they tend to snowball into a complete drama disaster. We’ve seen players like Carmelo Anthony, Dwight Howard, LeBron James and even Kobe Bryant (who was very close to being traded) all go through the uncomfortable breakup or near breakup with their teams.

Now it appears to be Derrick Rose‘s turn.

The face of the Chicago Bulls franchise since he was a rookie back in 2008-09, Rose, now, reportedly is on the brink of ending his injury-riddled tenure in Chicago according to ESPN’s Brian Windhorst. D-Rose had some great moments with Chicago including being the youngest player to ever win the MVP and some pretty good playoff runs, but ultimately injuries doomed his career — at least as a member of the Bulls.

Fast forward to this season and teammate Jimmy Butler has clearly taken over the title of franchise player. Reports have surfaced over the last year of Butler and Rose not getting along which certainly doesn’t help things. And now, with Rose down to this year and next year from the contract he signed from back in December of 2011, the Bulls reportedly will be looking to cut ties with their point guard.

With that said, what teams would take a chance on a player who has had numerous knee injuries (to name a few) and is collecting $20 plus million over his season and next? Any team who trades for Rose is definitely taken a chance on him being able to regain his form and shake off his cold start to the season. But here are three teams that could make sense for Derrick Rose:

The Mavericks really don’t have a lot to offer but they could take a chance on Rose if they would be willing to give up Chandler Parsons. But that might not be a bad thing because Parsons is recovering from an injury and if Mavericks could net back a player like Mike Dunleavy (couldn’t happen until December) they could have a lineup of Rose, Matthews, Dunleavy, Dirk and Pachulia.

Dunleavy would provide the outside scoring and when healthy is very serviceable at the three spot. In addition, the Mavs could always play small and slide Matthews to the three and have a backcourt of Rose and Devin Harris/J.J. Barea/Deron Williams.

WHY THIS MAKE SENSE:

Felton makes the most sense because he’s an expiring $4 million opposed to Williams two years, $5 million or Barea’s four years, $4 million. Harris is having a bad year shooting 18 percent from three and 36 percent from the field overall so it would appear that the Bulls would not want anything to do with him.

The Bulls are deep at the three spot as it is, but Parsons could also slide to the four and Chicago could have a versatile front court of Parsons/Mirotic for stretches as that certainly would put immense pressure on defenses because of their shooting ability.

As for the point guard position, the Bulls have been succesful over the years playing without Rose because of injury anyway. Players like Kirk Hinrich, Aaron Brooks and Raymond Felton could probably be a rotating committee at that spot.

Lastly, with a healthy Parsons, he certainly is an upgrade over Dunleavy or a younger Doug McDermott. The Bulls would be extremely long up front with Pau Gasol, Nikola Mirotic and Parsons at the small forward spot. Add Jimmy Bulter to that mix and the Bulls have a lot of weapons to combat against the Cleveland Cavaliers for Eastern Conference supremacy. On the flip side, you know Mark Cuban wants to desperately contend in the tougher Western Conference against the likes of the Clippers, Spurs, Warriors, Thunder and Rockets. Rose at least closes the talent gap and makes the Mavs interesting. Whether that would be enough to content is another question, but at least they close the gap…potentially.

We’re talking about Pat Riley here who would trade his own mother if it meant a possibly championship. While they just signed Goran Dragic, he’s had one very good year and many average years. Overrated? He very well might be and this season he’s not exactly off to the hottest of starts.

In addition, Rose is actually a couple of years younger than Dragic and provides “potentially” a much bigger ceiling for a Heat team that wants to contend. A backcourt of Rose and Wade might seem like it’s destined for failure, but Wade is at a different point in his career than current two-guard Jimmy Butler. Wade wouldn’t be as apprehensive to hand over the car keys to Rose — assuming the former MVP plays like one again.

Another key point is this: The obvious joke here is that Wade and Rose would play about 20 games out of the remaining 60(ish) games together (Dragic can’t be traded until December). But that’s actually not terrible because say the Heat encounter injury problems like everyone would expect, Miami would actually get to keep their draft pick if it lands in the top 10.

The flip side would be that Rose and Wade stay healthy along with Luol Deng and Chris Bosh to form a scary team come playoff time. With the emergence of Hassan Whiteside, Miami could be a legit contender —  “if” they all could stay healthy. And that’s a HUGE “if.”

WHY THIS MAKES SENSE:

Oddly enough, it might not make sense to a lot of people, but when you consider the Bulls get back a solid point guard who can hit the outside shot at a better clip than Rose while willingly taken a back seat, this could solve the many of the uncomfortable tension issues. While Dragic’s contract is not exactly what the Bulls would want, he’s 29 years-old and doesn’t have a lot of miles on his odometer. Dragic’s only played in 502 games before entering this season. He could be a very nice compliment alongside Jimmy Butler.

Miami, on the other hand, get a potential stud that could put them in the conversation with the aforementioned Bulls and Cavaliers. Dragic is a nice player, but Rose is a former MVP. The risk is there, but also there is only one more year left after this season on Rose’s contract as well.

Bottom line is you know Riles wants to win now and if he felt that Rose could return close to his previous all-star form, he very well could pull the trigger on this type of trade.

This is the obvious choice for a Rose pairing because the Jazz desperately need a bonafide point guard if they are going to make the leap to playoff team in the rugged Western Conference.

The options get cloudy for the Jazz on who they would send to Chicago in return for Rose, but they have plenty of options. They could trade a few expiring players and toss in a draft pick. They could part ways with one of their younger players like Trey Lyles, Alec Burks or Gordon Hayward — which probably would require receiving back a players like Doug McDermott and Tony Snell. That might not even be enough in Utah’s eyes but the Bulls could always package a draft pick if it meant getting rid of Rose and getting a young quality player like Hayward who still has yet to reach his ceiling.

The Jazz have $7 million in cap space so it gets a little tricky because NBA rules are convoluted. Assuming they could fit Rose under their cap without having to match salaries, the Jazz would send Chicago Trevor Booker’s expiring deal, point guard Trey Burke and another filler or two that would probably have to involve Tibor Pleiss. Chicago would have to cut a current player(s) or incoming player(s) but this could be an option if Utah would agree to send more compensation in form of a future draft pick to Chicago.

But remember, we just say Ty Lawson go to Houston for essentially a bag of donuts. The going rate for a point guard with a plethora of knee injures that appears to already be treading downhill, isn’t going to net you much in return — and that’s not even mentioning his contract.

PROPOSED TRADE:   (one of many potential options)

*** This trade is contingent on a few things remember. In addition the Jazz could decide to pull a blockbuster deal if it meant getting a good return on Gordon Hayward. Utah appears to value Hayward very high so I doubt a deal including him would happen unless the Bulls sent out a few of their young blue chippers and potentially even a future number one draft pick.

WHY THIS MAKES SENSE:

It only makes sense for the Bulls if they get a quality player and/or pick in return. Chicago is ready to win now so trading Rose for just the sake of trading Rose doesn’t help the Bulls. While Rose and a Chicago divorce could get ugly, there is no way the Bulls brass will let him go just for the sake of getting rid of him and his huge contract.

It might take a blockbuster deal involving Hayward. However, Utah would certainly want more back than just Rose. McDermott seems like he would be a good fit in Utah and could be the young swingman Utah would want in a situation where they would have to replace Hayward. If the Jazz could net back McDermott and Dunleavy or Snell, they would be in a win/win situation. With McDermott they have their three-man of the future along with an incumbent starter in Snell or Dunleavy to help them win now.

Utah makes the most sense but might be the most difficult option of the three to pull off. However, like I previously mentioned, we did see Ty Lawson go for 10 cents on the dollar to Houston so there could be a very real possibility the Jazz could land Rose without having to give up a ton.

I hope the Jazz pursue a deal for Rose because this could make the Jazz a scary team moving forward if Rose is close to 100 percent of what he used to be. Hell, even a 70 percent Rose is better than what they currently have with last year’s first round pick Dante Exum being out with a torn ACL.