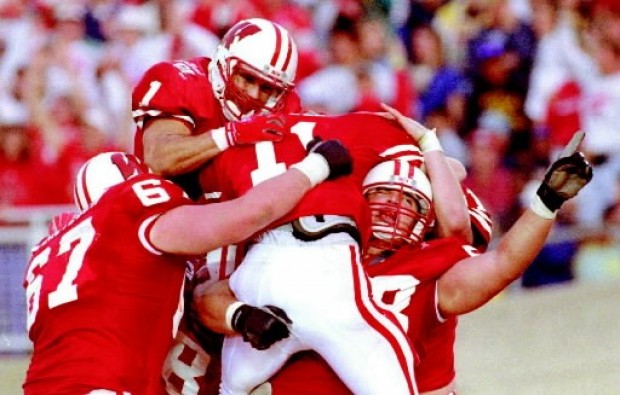 8. 1994’s Game – UCLA Bruins vs. Wisconsin Badgers – Final Score: Wisconsin – 21 – UCLA – 16 – The 1994 Rose Bowl marked the beginning of Wisconsin’s climb to become one of the Big Ten’s perennial powerhouse teams. Playing a mere minutes away from the UCLA campus, fans thought the Bruins faithful would outweigh the Badgers fans, giving UCLA a clear home field advantage. Instead, Wisconsin head coach Barry Alvarez promised his team the Badgers would make the Rose Bowl their own. An abundance of Wisconsin fans made the long trip to Pasadena and by game time, UCLA no longer had a home field advantage. UCLA scored first on a 27-yard field goal and Wisconsin answered on a Brent Moss run. Wisconsin added one more Brent Ross rushing touchdown before half-time. By the fourth quarter, UCLA trailed 14-3. The Bruins scored to close the gap 14-10, but Wisconsin had an answer on a Darrell Bevel 21-yard run. UCLA scored one more time in the fourth quarter, but failed on the two-point conversion. The Badgers claimed their first ever Rose Bowl victory and Barry Alvarez would add two more in the decade. Wisconsin’s climb to the top of the Big Ten began in 1994. 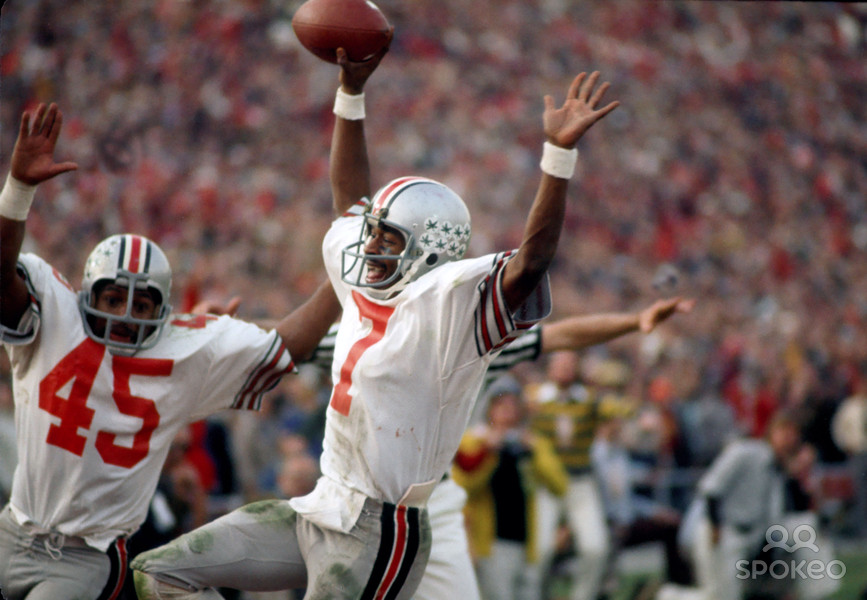 7. 1975’s Game – USC Trojans vs. Ohio State Buckeyes – Final Score: USC – 18 – Ohio State – 17 – The 1975 Rose Bowl match up paired the third ranked, 10-1 Ohio State Buckeyes vs. the fifth ranked, 9-1-1 USC Trojans. The game featured the Heisman-winning running back Archie Griffin from Ohio State and runner-up running back Anthony Davis from USC. Despite the Heisman candidates, both teams were led by their quarterbacks during the game. The first half featured a defensive battle and as the game headed into half-time, Ohio State led USC, 7-3. Despite the slow start, the fourth quarter proved more than explosive enough to make up for the first three quarters. USC scored an early fourth quarter touchdown to give the Trojans a 10-7 lead. The Buckeyes answered with a 3-yard run by Cornelius Greene to take a 14-10 lead before tacking on a 32-yard field goal to take a 17-10 lead. USC quarterback Pat Haden led his team down the field, hitting J.K. McKay on a 38-yard pass in the end zone. Trojans head coach John McKay made a gutsy call and chose to go for the two-point conversion and the win. Haden connected with Shelton Diggs in the end zone and the Trojans took a 18-17 lead. Ohio State drove down the field, but a late sack forced the Buckeyes into a 62-yard field goal attempt to win the game. Kicker Tom Skladany came up short and the Trojans won the game.