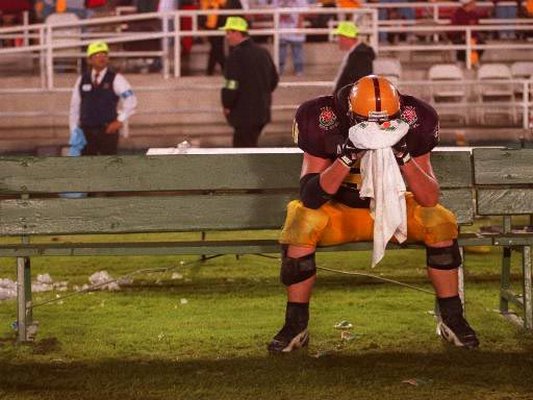 2. 1997’s Game – Arizona State Sun Devils vs. Ohio State Buckeyes – Final Score: Ohio State – 20 – Arizona State – 17 – The 1997 Rose Bowl featured the second ranked, 10-0, Arizona State Sun Devil playing against the fourth ranked, 10-1, Ohio State Buckeyes. This year’s Rose Bowl started off slowly, with the Buckeyes taking an early 7-0 lead on a 9-yard David Boston reception in the first quarter. Arizona State answered with a controversial 25-yard touchdown pass from Jake Plummer to Ricky Boyer. The replay of the Sun Devil’s first touchdown showed Boyer had failed to catch the ball before it hit the ground. Heading into half-time, the game was tied at 7. The Sun Devils drove down the field on their opening second half drive, but were stopped at their own 19-yard line and had to settle for a field goal. As the third quarter came to a close, Ohio State connected on a 72-yard touchdown to take a 14-10 lead heading into the fourth quarter. With six minutes left in the fourth, Ohio State lined up for a 38-yard field goal to widen their lead. Instead, Sun Devil’s Brent Burnstein blocked the kick. Arizona State scooped up the ball and headed towards the end zone for the go ahead score. However, the referees called a forward lateral on the play and Arizona State took over on their own 42-yard-line. Quarterback Jake Plummer was able to lead the Sun Devils into the end zone, to take a 17-14 lead with only two minutes remaining in the game. Aided by a pair of Arizona State pass interference calls, the Buckeyes were able to score on a five-yard pass to David Boston to take a 20-17 lead. The Buckeyes win snapped their 23-year streak without a Rose Bowl title.