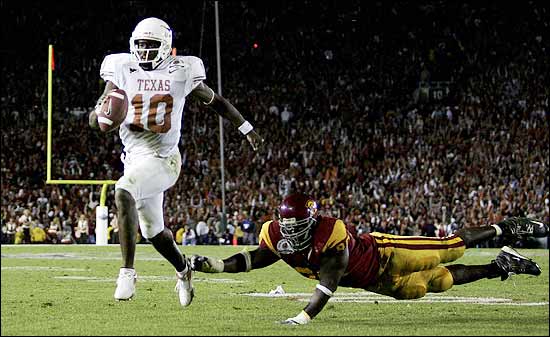 1. 2006’s Game – USC Trojans vs. Texas Longhorns – Final Score: Texas 41 – USC – 38 – In what might be one of the best National Championship games of the modern era, the 2006 game paired the undefeated USC Trojans vs the Texas Longhorns. The Trojans were led by Heisman-winning running back Reggie Bush and future top ten pick at quarterback in Matt Leinart. Bush had been making players look stupid the entire season and plenty of experts expected the Trojans, who were riding a 34-game winning streak into the game, to blow out the Longhorns. Instead, a Vince Young led Texas team answered every USC touchdown, with one of their own. The game went back and forth, with the Longhorns leading 16-10 at half-time. By the start of the fourth quarter, Texas trailed USC by a point, 24-23. The fourth quarter is where the magic of this game happened and why it may always be the best Rose Bowl game of all time. With the Trojans leading 38-33 late in the fourth quarter and driving down the field, Texas forced USC into a fourth and two on their own 45-yard-line. USC head coach Pete Carroll chose to go for it and Matt Leinart handed the ball off to LenDale White, who was stuffed inches shy of the first down marker. Vince Young and Texas took over and drove down the field before stalling on USC’s 9-yard-line. Facing a fourth down, Vince Young, who lined up in a shotgun formation, scrambled towards the end zone. With the USC defenders closing in on him, Young was able to cross the corner of the end zone and help Texas take a 39-38 lead with just 19-seconds left in the game. Young was able to scramble into the end zone for the two point conversion and Texas took home their first National Championship since 1970.

And in case you forgot Vince Young’s 4th down, game winning touchdown, check out the video below: