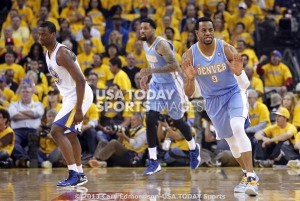 Andre Iguodala is probably the most underrated athlete in the NBA as he demonstrates his acrobatics on this reverse ally oop pass from Andre Miller in the third quarter of the Nuggets/Warriors game.  Who throws a better ally oop pass better than Andre Miller.