Home / COMBAT / Not So Fast Manny 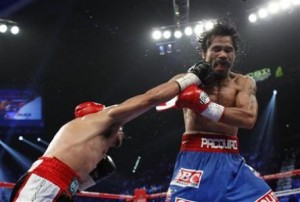 Manny Pacquiao may want to rethink his career plans. In a fight that most viewed as a mere celebratory formality, Manny’s hype train hit a major bump in the road. Juan Manuel Marquez once again has all the right to feel that he’s beaten the man from the Phillipines. Marquez looked to be at his best yet, at 38 years old, out-manuevering the champ and landing flush counter punches. He looked like he had a better control of the fight almost throughout. I’m not sure what the ringside judges saw, but the Mexican guy that walked in with the mariachi band seemed to be dictating what happened.

This drastically diminishes my opinion of Manny Pacquiao and reinforces the popular notion that Floyd Mayweather would hand Manny a lesson in the intracicies of the sweet science. Pacman looks like a purely rhythm fighter after this. And Juan Manuel Marquez has just figured out that rhythm and outdone the perceived undisputed one twice now. Once in their first and now in their last. You can’t convince me otherwise. Marquez weaved around all Pacquiao’s power shots and the champ seemed to be in almost slow motion compared with his regular self.

But this is part of the mystery of the sport. Some fighters wake up one day, at an odd particular age, and they soon find that they’ve lost it. That quick instinct. That extra twitch and shuffle you held over your oponents head. That didn’t seem to be there any more. This isn’t the electrifying figher that has dominated every single round of recent memory. He seems to be a slow-mo old school version, in flame logo’d shorts, throwing predictable big straight lefts and little else of importance. Juan Manuel Marquez avoided that one key punch, at times like he was working against a handpicked sparring partner. Marquez seemed markedly better at points and would have swayed many more if the biased broadcast hadn’t tried to tilt the favor towards the champ. The boos at the end said it all. I don’t know if he’s the biggest box office draw anymore. I see Floyd as the one with the reinvigorated fanbase and backing. He can now say “look, I just dominated that guy that fought you even.”

And then he can go back to pretending like he doesn’t need to fight him. And Manny’s to blame. He either lost something, didn’t train at 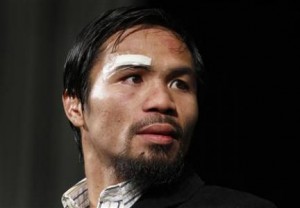 all, or simply fought the wrong man. But the buzz has softened. The tape shows something more than just a chink in the armor. May show the blueprint. Boxing fans can hope. The judges at least kept it a conversation. The money will now move heavily to Mayweather if this fight ever does make it to Sin City. What is certain, interest didn’t rise in what many anticipate as being an unprecedent event. It may be on the slide down.

For a very angry man that left for Mexico after these words, “It’s hard when you’re fighting your rival and the three judges, too,” I agree. We may have two imaginary “legends” in each corner of the Super Fight. The question now appears: Are Floyd and Manny really who we thought they were?